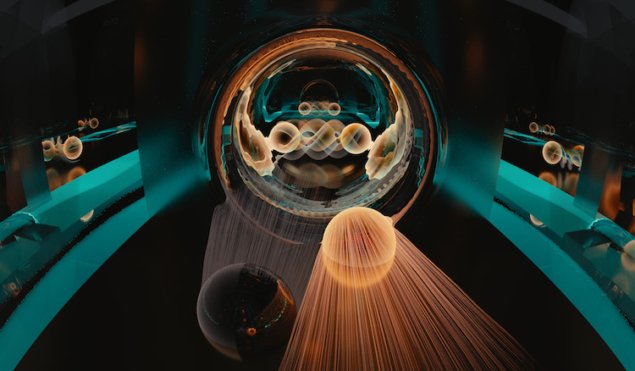 This perfect transmission of electrons through a finite barrier results in a doubling of the conductance at a superconductor/normal metal interface. This doubling effect, first predicted by Alexander Andreev in 1964, is very rarely observed in an experiment because it is extremely difficult, in practice, to make a “perfect” interface free of naturally forming barriers and defects.

Researchers led by Ichiro Takeuchi of the University of Maryland in the US say they have now observed Klein tunnelling in the form of Andreev reflection. They saw the effect as electrons travel through the interface between a metal and a topological superconducting state – that is, the superconducting surface state of a topological insulator.

“Some sort of barrier usually forms at the interface between a metal and a superconductor, which results in backscattering of some of the electrons travelling through the interface and a reduction in the Andreev reflection effect,” explains Takeuchi. “This backscattering is completely forbidden at our metal-topological interface, however, thanks to the topologically protected electronic states in the topological insulator.

“The result is that every electron has to travel through the interface to the superconductor, giving rise to perfect electron transmission and perfect Andreev reflection,” he tells Physics World. “Klein tunnelling thus essentially ‘removes’ the barrier at the interface.” This effect could be used to make more efficient superconducting devices in the future, since it is such barriers that adversely affect device performance and produce variations in device parameters.

Takeuchi and colleagues performed their experiments on heterostructures made of the superconductor YB6 placed underneath samarium hexaboride (SmB6), which is a topological Kondo insulator. Kondo insulators are strongly correlated materials, which develop a narrow energy band gap at low temperatures due to the Kondo effect. This energy gap means that there is an insulating bulk sandwiched between topologically protected conducting surface layers.

“It is this Kondo insulating nature of SmB6 that was crucial in our experiments,” explains Takeuchi. “In other topological insulators, such as Bi2Se3, the bulk is sometimes not insulating, which means that we cannot probe the conducting surface state because it is ‘contaminated’ with conductivity from the bulk.

“In our study, the Kondo gap of SmB6 at low temperatures provides the ‘extra protection’ against bulk conduction that would have otherwise masked the spin-momentum locking (the topological effect) in the surface states.”

The researchers were able to induce superconductivity in the surface states of SmB6 thanks to the proximity effect of YB6. To then carry out the Andreev reflection experiment, they injected electrons into this topological superconducting state from a metal – in this case a metal tip made of a platinum-iridium (PtIr) alloy. This arrangement is a standard “point contact” spectroscopy set up.

“We bring the PtIr tip into contact with the surface states of SmB6, so that the electrons in the tip region ‘pick up’ the helical (spin-momentum locked) states of SmB6,” explains Takeuchi. “This is the second proximity effect at work in our experiment. The third ingredient is the presence of 1D conduction channels that are present on the surface of SmB6.

“Klein tunnelling is an inherently 1D effect and these nanostructured 1D channels are necessary. So, for a seemingly simple point-contact experiment, we have many factors coming together in a ‘perfect storm’ to allow us to observe Klein tunnelling.”

The researchers say they repeated their experiment many times and kept getting the same result: the normalized differential conductance gap was exactly two in the superconducting gap.

Towards a new family of spintronic and superconducting devices

The effect could be used to make an entirely new family of spintronic and superconducting devices in which complete spin-momentum can produce unique device functions and properties, he says. “For example, the fact that we have observed perfect Andreev reflection means we can now imagine making a spintronics device with an inherently perfect spin filter with magnetic layers. What is more, the SmB6 could be fabricated using relatively simple RF sputtering techniques, so devices and circuits made from them could be readily scaled up.”

The disappearance of a tunnel barrier at the metal/superconductor interface could also be exploited, in principle, to make arrays of Klein Josephson junctions that should all have the same junction parameters without any variations, he adds. “This is a much-coveted feature for superconducting electronics, including quantum information processing devices.”