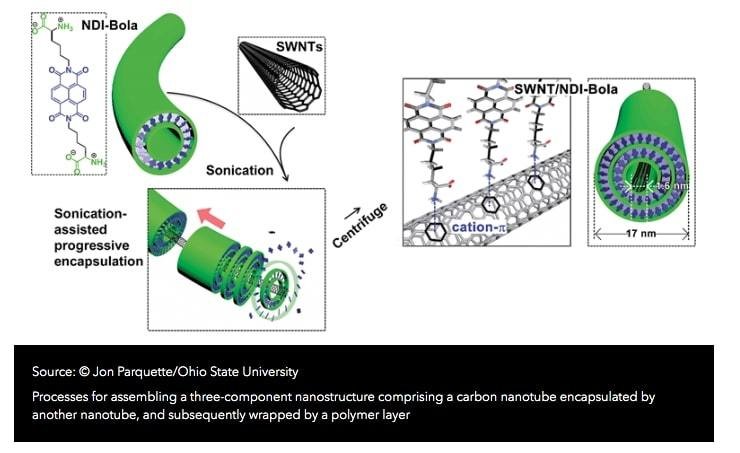 Scientists have devised a sheath for carbon nanotubes that threads itself into place, piece by piece.

Carbon nanotubes – sheets of carbon wrapped into cylinders – have risen to prominence due to their incredible mechanical, optical and electrical properties. Conducting or semiconducting, they can be used as nanoscale cables in the quest for ever smaller electronics.

But like everyday cables, carbon nanotubes require sheathing to ensure good transmission and prevent contact with each other. This is especially important because carbon nanotubes will naturally bundle together. Strategies do exist to sheathe the nanotubes with polymers, but these are often complicated and unreliable.

Now researchers at Ohio State University and the University of Akron, also in Ohio, have found an ingenious solution. The team, led by Jon Parquette, has made another type of nanotube, from a naphthalenediimide-lysine (NDI-Bola) monomer. Cations on the inner surface of this nanotube attract the carbon nanotube’s π electrons, making it a promising sheath material.

Despite this attraction, trying to slide a carbon nanotube into a fully-formed NDI-Bola nanotube would be a hopeless task. To get round this, Parquette’s team used ultrasound to break the NDI-Bola nanotubes into small ring sections. These pieces then threaded themselves onto the carbon nanotubes, like beads onto an abacus, before reconnecting to form a robust sheath.

The scientists then added an additional polymer layer, and found it adhered much more securely to the NDI-Bola than to bare carbon nanotubes. Parquette and his colleagues hope their discovery will find uses in fields as diverse as electronics and medicine.