06/02/2020 Contrary to what is believed, monolayer graphene (a sheet of carbon just one atomic layer thick) has 3D mechanical properties and they can now be properly measured and meaningfully described thanks to high-pressure Raman spectra measurements on the material. This result, from researchers at Queen Mary University of London, might have implications for when graphene – and indeed other 2D materials – are employed in applications such as mechanical sensors. It also highlights the fact that Raman spectroscopy can be used as diagnostic tool to measure the mechanical properties of graphene when it is employed as a reinforcement for other materials. 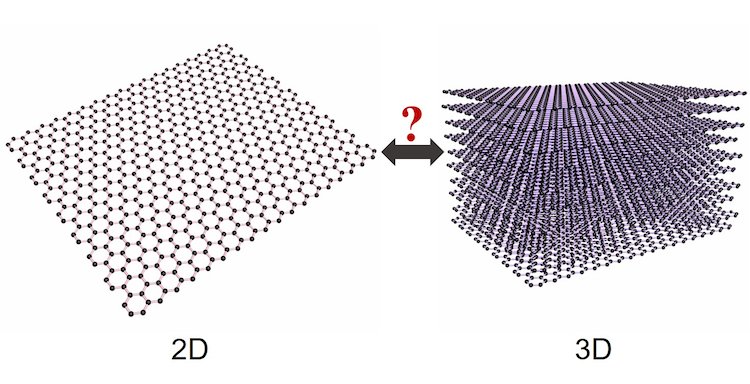 “Graphene is called a 2D material because its carbon atoms lie in a two-dimensional plane,” explains team member Yiwei Sun. “However, monolayer graphene has electrons in π-orbitals above and below this plane.

If we compress a sheet of graphene in a direction normal to the sheet, graphene is strained because the π-electrons become compressed and strained. If the sheet is compressed in all three directions, it undergoes 3D strain, however. This means that 3D elastic parameters can and must be defined for this material.

“So, graphene should really be thought of as a 3D material, not 2D, as far as certain mechanical properties are concerned.”

Sun and colleagues also found that the stiffness of monolayer graphene is the same as that of graphite (which is a stack of graphene layers).
These results complement those from previous experiments in which researchers studied the effect of pressure in graphene supported on a substrate such as copper. The substrate strongly affects the contraction of graphene and thus skews the result, says Sun.

Such experiments are performed in a diamond anvil cell (DAC). Here, the samples are loaded into a pressure-transmitting medium, such as water, in a hole of a 50-micron-thick metal gasket sandwiched between two diamond culets 150 microns in size. Pressures of several gigapascals are then applied to the cell.

“What is new in our work is that we studied unsupported monolayer graphene in solution”, explains Sun.

The researchers started out in the usual way – with a monolayer of graphene on a copper substrate. They then got rid of the substrate by etching it away in a solvent after protecting the graphene by a polymer film (PMMA) so that it floated on the etchant and could be located. They took the graphene with the polymer out of the etchant, placed it on a glass slide and rinsed it with de-ionized water. Next, they loaded the graphene with the PMMA in DMF, which dissolved the PMMA leaving the monolayer graphene free-standing in it. “We loaded the monolayer graphene several times so that it was concentrated enough for a decent Raman signal,” says Sun.

The DMF prevents the graphene from crumpling and/or bonding together to form graphite for long enough to perform the high-pressure experiments. These involved compressing the graphene-containing liquid in a diamond anvil cell to pressures of 12 GPa and measuring its in-plane and out-of-plane (normal to the plane) stiffness using optical Raman spectroscopy.

The researchers compared their findings to those obtained on 3D graphite and found that both the in-plane and out-of-plane stiffnesses are the same for both materials, within the experimental errors of their experiment.

“Stiffness is usually defined in terms of the stress and strain (the change of thickness) a material can endure,” explains Sun. “We find that under pressure the thickness of graphene decreases at the same rate as that of graphite. Hence our claim that ‘graphene is graphite’ as regards some key mechanical properties.”

The team, led by Colin Humphreys and David Dunstan, also reports on a shift to higher energy frequencies of in-plane vibrations (phonons) of the unsupported monolayer graphene to 5.4/cm/GPa, which is very close to that of graphite (4.7/cm/GPa).

The in-plane force on graphene under pressure is significantly reduced since graphene, like graphite, is very soft out-of-plane (this is why we can write with the “lead” in pencils, which is graphite),” Sun tells Physics World. “This reduction is what causes the sublinear shift of its in-plane phonon frequency with pressure. This physically meaningful experimental observable allows us to define the thickness and strain of graphene in terms of the thickness of its π-orbitals.”

The technique employed in this study, which is reported in Physical Review Letters, might be used on other unsupported 2D materials in solution, he adds.

“High-pressure experiments like these are easy to describe, but they are notoriously difficult to perform,” writes John Procter of the University of Salford in a related Viewpoint article. Procter’s group was the first to study the effect of strain using Raman measurements of graphene in Si/SiO2 substrates under high pressure. “Fiddly handiwork is required to align the DAC and sample with micrometre-precision. Because of these demands, such experiments also have a high failure rate. Sun and colleagues’ ability to study graphene under a known high stress – a first – is therefore a major achievement.”

He adds that the research could help in the development of strain sensors based on graphene. “It may also affect how Raman spectroscopy is used as a diagnostic tool for new types of graphene composites that serve to reinforce other materials. Here, the spectroscopy helps determine the extent to which stress or strain is transferred from the host material to the graphene reinforcement. Knowing graphene’s 3D characteristics will help researchers optimize this reinforcing behaviour.”

Sun and co-workers say they are now looking at how the atmosphere affects the mechanical properties of graphene and graphite. Such studies will be important for when it comes to real-world applications of these materials. “For example, a graphene-based device may perform very differently in a humid Manchester in the UK to a dry Arizona in the US,” says Sun.