The Legacy Of César Lattes

01/02/2020 When César Lattes graduated from the University of São Paulo in 1943, he was still a teenager and the only physics major in his class. Little did he know that just a few years later his research would be connected to two Nobel prizes, and he’d be a national science hero in Brazil, with streets and town squares named in his honor.

“If people here know the name of a physicist, then it’s César Lattes,” says Cássio Leite Vieira, a science communicator at CBPF, the Brazilian Center for Research in Physics, who wrote his PhD thesis on a particle detection technique Lattes helped pioneer.

“His deeds have been instrumental for Brazil, and they had a ripple effect on Argentina, Bolivia, Chile, Uruguay and many other countries.”
A beneficiary of a new university’s initiative to kick-start experimental physics in Brazil, Lattes was instrumental in developing the technology used to discover the pion, a short-lived particle produced when particles from space collide with the Earth’s atmosphere.

Lattes’ work and reputation paved the way for the development of experimental physics in Brazil and across Latin America. His legacy lives on in particle astrophysics experiments throughout the region.

Experimental physics in its infancy

When Lattes began his studies, there wasn’t much experimental physics research going on in Brazil. Before the 1930s, university professors mostly concentrated on teaching, and what research they did pursue was focused on theory. 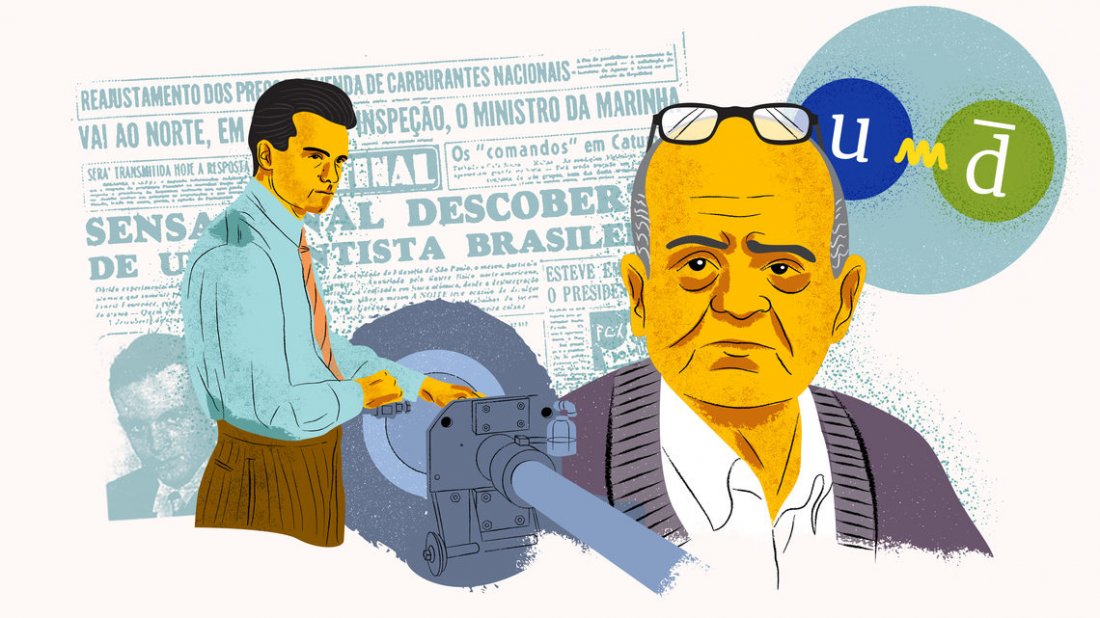 That changed in 1934. In an effort to distinguish itself, the newly founded University of São Paulo invited famous Italian physicist Enrico Fermi to launch its program in theoretical and experimental physics.

Fermi declined but recommended that Russian-Italian researcher Gleb Wataghin go in his place. One of Wataghin’s first students was Lattes.
On the invitation of Wataghin, another famous Italian experimental physicist, Giuseppe Occhialini, came to Brazil to carry out research on cosmic rays. He wound up giving a course on X-rays that was attended by only one student: Lattes. Occhialini turned the course into a hands-on experience for Lattes, tasking him with developing photographic film exposed to radiation. It was Lattes’ entry point into experimental physics and pioneering research.

In 1944 Occhialini returned to Europe to work with English physicist Cecil Frank Powell at the University of Bristol, where scientists used special photographic tools called nuclear emulsion plates to detect charged particles. The plates are similar to regular black-and-white photographic film. They have a layer of gelatin as support for light-sensitive silver salt. When charged particles pass through the plate, they leave behind tracks that become visible after the plate has been developed.

Occhialini sent one of those plates to Lattes, who had been studying atmospheric particle showers using particle detectors full of supersaturated vapor called cloud chambers. Lattes quickly realized that the emulsion plates were superior to his current methods, so he went to Bristol to learn more about the technique.

There, he came up with the idea of adding boron to the coating on the photographic plates, a modification that would allow him to use them for studies of cosmic rays.

In 1946 while on a skiing vacation in the French Pyrenees, Occhialini brought two sets of plates—one with Lattes’ addition of boron and one without—to an observatory 2877 meters high (about 1.8 miles above sea level) on Pic du Midi mountain. Upon his return, he developed the plates and found that the ones with Lattes’ modification showed tracks from a particle that had until then never been observed.

The new particle turned out to be a pion, a treasure scientists had sought since Japanese theoretical physicist Hideki Yukawa predicted its existence in the 1930s.

Scientists had discovered the pion, but the plates didn’t contain enough information for them to determine all of the its properties, including its mass.
Lattes figured that if he took the plates to higher elevation, where they would be exposed to more pions from the collisions of cosmic rays with the atmosphere, he’d get the additional information he needed.

So, he embarked to Bolivia’s Mount Chacaltaya—about twice as high as Pic du Midi at an elevation of 5421 meters (about 3.7 miles)—to drop off his photographic plates. He picked them up a month later and returned to Bristol, where the team found many more pion decays. The additional data allowed them to calculate the mass ratio between pions and muons, a different type of particle discovered in cosmic rays 10 years earlier, and show that the pion is heavier.

The development of the photographic emulsion technique and its use for the discovery of the pion earned Powell, the principal investigator in Bristol, the 1950 Nobel Prize in Physics. Yukawa, the predictor of the pion, had already received the prize the year before. 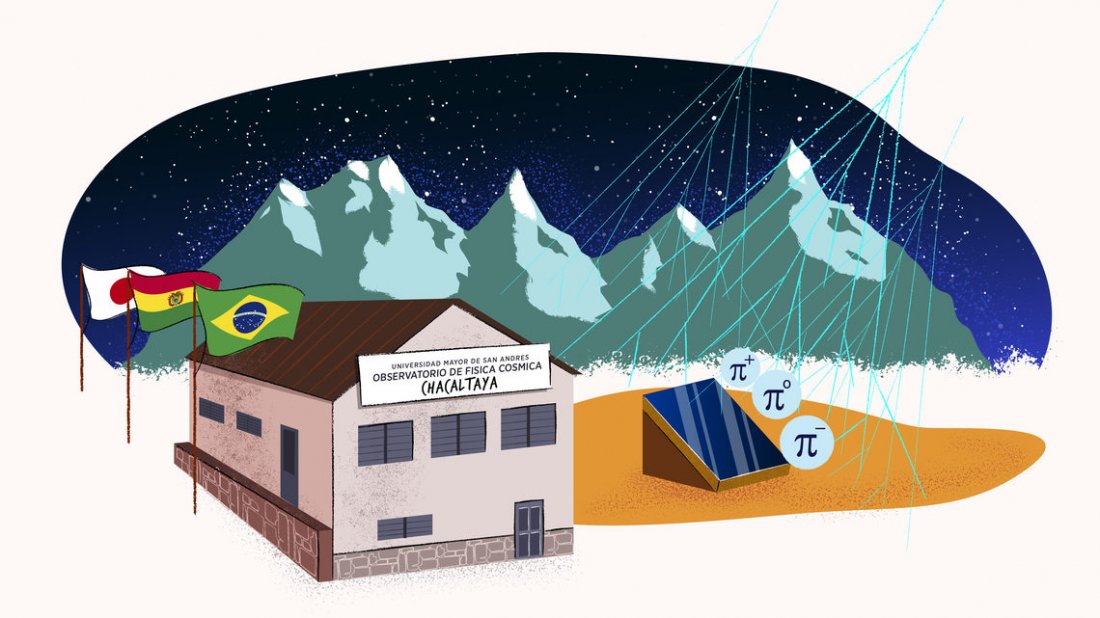 Advancing science in Brazil and beyond

Following the discovery, Lattes realized that the technique could also be used at particle accelerators to detect pions that were artificially produced.
In 1948 he took his knowledge of photographic plates to the University of California’s Radiation Laboratory in Berkeley, known today as Lawrence Berkeley National Laboratory. The lab was home to what was then the world’s largest particle accelerator. In a matter of days, he and US colleague Eugene Gardner succeeded in detecting the pions being created there.

The experiment generated a lot of press in the United States. That publicity helped the laboratory’s director, Nobel Laureate Ernest Lawrence, push for the construction of an even more powerful accelerator called the Bevatron.

Back in Brazil, Lattes was hailed a hero of the nuclear era. “It was the first time in our country’s history that someone had really done frontier research in experimental physics in real terms and was noted for that,” Vieira says.

Lattes did not consider himself a star, Vieira says, but he agreed to become the face of a popular campaign seeking more government funding for science. One of the results of this effort was the foundation of CBPF in 1949, with Lattes as its scientific director.

In the following years, Lattes continued to push to expand Brazil’s program in experimental physics.

In 1952 CBPF signed an agreement with the University of San Andrés in Bolivia to build at the peak of Mount Chacaltaya a laboratory where scientists could study cosmic rays. The laboratory gave rise to new research groups in Bolivia and across South America.

The low cost of the materials used—a few photographic plates, chemical reagents and a microscope—allowed even countries without much in the way of technological and financial resources to conduct cutting-edge research and establish themselves in high-energy physics.

At the end of the 1950s, Lattes and Yukawa expanded the reach of the Chacaltaya lab by kicking off a successful Brazil-Japan collaboration in cosmic-ray research. The partnership would last for more than 30 years.

Lattes died in 2005. That same year, French-born scientist Xavier Bertou and others were implementing code at the Pierre Auger Observatory in Argentina, an international observatory designed for studies of extremely high-energy cosmic rays.

To detect these particles from the ground, the observatory uses an array of tanks full of water called Cherenkov detectors. When high-energy particles pass through the tanks, they travel faster than the speed of light through water, creating a bluish glow in their wake.

Bertou and his colleagues wanted to test the detectors’ sensitivity to gamma-ray bursts.

“We found that we could achieve the same sensitivity of the observatory’s 1600 detectors with a single detector—if we placed it on Chacaltaya,” Bertou says.

Following up on that conclusion, the team installed a detector on the mountain. But the idea didn’t stop there. It grew into an international network of detectors called LAGO, the Latin America Giant Observatory.

While the LAGO detectors are a spin-off of the Pierre Auger Observatory’s Cherenkov detectors, the LAGO technology is much simpler, using smaller water tanks, simpler electronics and fewer light-sensitive detectors.

“That design concept is intentional,” says LAGO principal investigator Iván Sidelnik from the Bariloche Atomic Center in Argentina. “It makes sure that our technology is affordable for all collaboration partners and can be built by all participating institutes, even if they are small.”

Today, the LAGO collaboration has almost 100 members from 10 Latin American countries and Spain. Adriana Gulisano, a physicist at the Argentine Antarctic Institute and Argentina’s representative for LAGO, just traveled with colleagues to add to the LAGO network the first detector based in Antarctica.
She wants to use the data to learn more about space weather: the intricate interplay between the solar wind, Earth’s magnetic field and the production of particle showers in our planet’s atmosphere.

“Installing a detector in Antarctica’s harsh conditions started as this crazy idea some of us had after a coffee meeting seven years ago,” she says. “It’s so rewarding to see that our thought experiment has become a reality.”

For many undergraduate students from countries outside of Argentina, Brazil and Mexico—the powerhouses of Latin American high-energy physics—LAGO proves to be the entry point into the broader field, often leading to their participation in larger international collaborations.

Luis Nuñez from the Industrial University of Santander, Colombia, helped set up LAGO nodes in Colombia and in his native Venezuela. “The collaboration’s ‘business model’ takes into account the particular circumstances in Latin America,” he says. “In some places, like Peru and Bolivia, you don’t have large national funding agencies, so for those countries to be able to participate in LAGO, the technology needs to fit the budget of local universities.”

Several of Nuñez’s students are working on experiments at the Large Hadron Collider at CERN in Geneva. “The training we provide locally can really change the lives of our students and create opportunities to work in research areas we don’t have in Latin America,” he says. 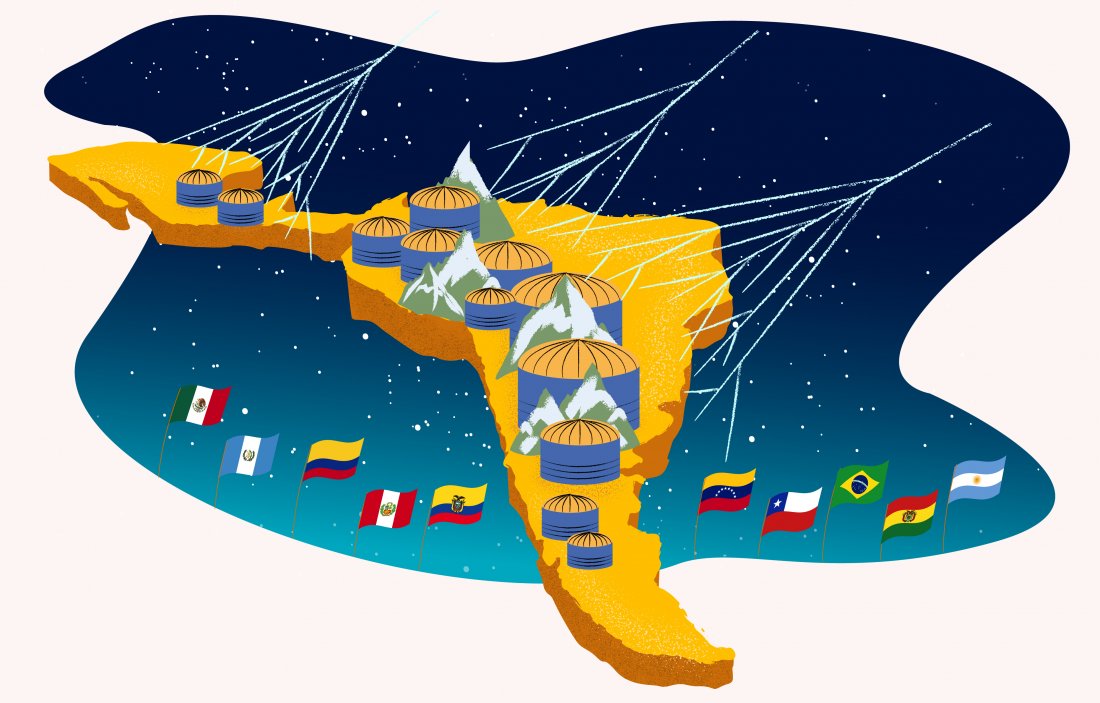 Bolivian physicist and LAGO member Martin Subieta credits LAGO with jump-starting his career in experimental physics, which has recently come full circle.
After receiving his undergraduate training at Chacaltaya lab, Subieta moved to Italy to complete a PhD and pursue postdoctoral research, including work on the ALICE experiment at CERN. Now he’s back in Bolivia, as a professor at the University of San Andrés and a researcher at Chacaltaya Observatory.
“What started with Lattes at Chacaltaya and the discovery of the pion has been wonderful for Brazil and Bolivia,” he says. “It actually has been important for science in the entire region and led to special connections between Latin America and the rest of the world.”

The BASJE collaboration for cosmic-ray research at Chacaltaya, for instance, connected Bolivia with Japan and the Massachussets Institute of Technology, a strong relationship that lasted from the early 1960s to just a few years ago. Bolivia is now starting a new particle astrophysics project called ALPACA with Japan.

With LAGO and other partnerships, Latin America has established itself as a fertile ground for big international science projects.

The trend continues with major projects on the horizon, such as the Cherenkov Telescope Array, the Southern Wide-Field Gamma-Ray Observatory, and the proposed ANDES underground lab, a project advocated for by LAGO founder Bertou that would strengthen Latin America’s footprint in neutrino and dark matter research.

“The world has discovered Latin America as a great place for top science,” Vieira says. “Here, they not only find excellent observing conditions, but also a well-trained, vibrant community of scientists.”