24/01/2020 The lattices are printed using inks composed of elastomeric matrices with tunable cross-link density and an anisotropic filler, which means that their elastic modulus and thermal expansion coefficient can be precisely controlled. The technique could be extended to many other temperature-responsive materials and different material designs to produce scalable, reversible, shape-shifting structures with hitherto unseen complexity for use in applications such as stents or scaffolds for artificial tissue, deformable lenses in telescopes and soft robotics. 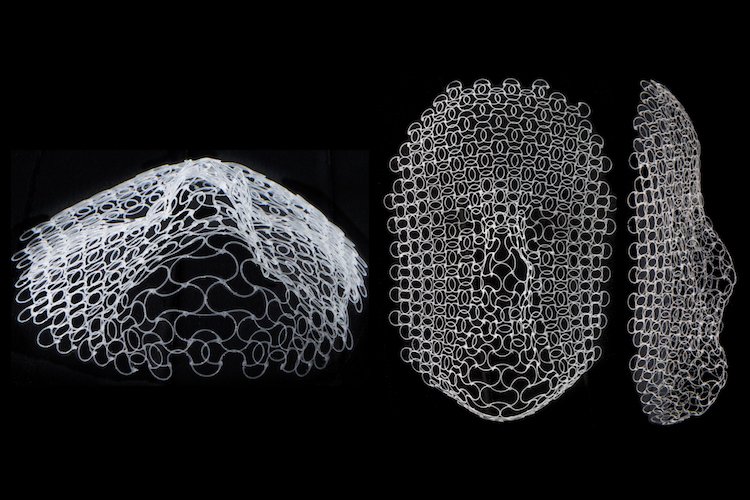 Materials that reversibly change their shape in response to an external stimulus, such as temperature, could lead to a host of new applications in areas such as additive manufacturing, robotics and biomaterials. Most of the shape-morphing structures made so far, however, have been limited in their ability to transform into complex and doubly curved shapes. This is because such transformations require the surface of a material to curve in two perpendicular directions at the same time by different amounts at different places.

This double curvature effect (which forms the basis of a famous nearly two-centuries-old theorem from the German mathematician Carl Friedrich Gauss) is familiar to anyone who has tried to gift-wrap a soccer ball, explain the researchers, led by Jennifer Lewis, William Boleyand L Mahadevan of Harvard University.

To transform paper, which is a flat (curvature-free) object, to the shape of a ball, which has positive double curvature, the paper needs to be creased and crumpled at the sides and bottom of the ball. Only if the paper sheet were able to naturally stretch or contract, or indeed both, could it then adapt
to the shape of the ball.

To make a shape-shifting sheet doubly-curved, Boley, Rees and colleagues first calculated the form of the printed planar lattice that would deform into a given shape when heated. The lattice contained curved bilayer ribs with individually programmable shapes. The ink they then used to print it comprises elastomeric matrices made of PDMS (which naturally expands when heated) with tuneable cross-link density and anisotropic fillers comprising short glass fibres that have a far lower thermal expansion coefficient than the silicone matrix.

The ribs bend in response to changes in temperature, with the lattice nodes expanding and contracting much more than would a continuous sheet. The voids in the lattice also easily accommodate large changes in surface area when the ribs are designed to grow at different rates across the sheet, say the researchers.

To independently control extrinsic curvature, the researchers created multiplexed bilayer ribs composed of four different materials that allowed them to encode a wide range of 3D shape changes in response to temperature. As an example, they designed and printed planar lattices embedded with a conductive liquid metal that morphs into a dome shape to form an antenna whose resonance frequency changes as it deforms.

They also printed a flat mesh that deforms into the shape of a human face (that of Gauss himself in this work) when subjected to a certain temperature. They did this by designing each individual rib of the lattice to bend by a predetermined amount to preferentially form the shape of a nose or that of an eye socket. They say they can vary the arrangement of the four ribs to pre-programme whether the rib as whole curves up to morph into the shape of a nose, for example, or slopes down to form part of an eye socket.

The team, which includes researchers from Boston University and the Massachusetts Institute of Technology (MIT), says that it is now looking to apply its technique to stiffer materials for applications such as self-propelling fins and wings.

Full details of the present research are reported in PNAS.