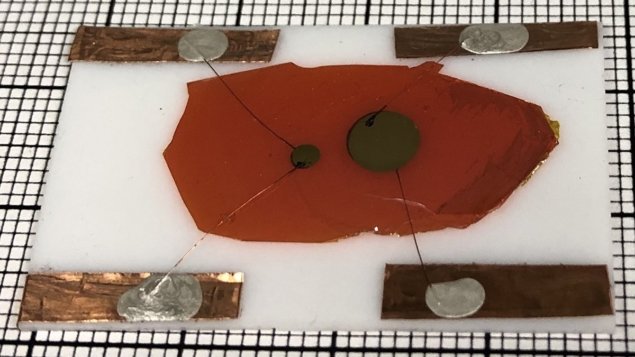 A semiconductor material containing lithium-6 shows great promise for creating highly-efficient detectors of thermal neutrons. The 2D layered material was created and tested by scientists in the US and could someday be used in detectors at neutron scattering facilities – boosting the efficiency and spatial resolution of experiments. Devices based on the semiconductor material could also be developed as personal radiation monitors and have security applications such as detecting radioactive materials like plutonium.

Thermal neutrons are low-energy particles that are created in huge quantities in nuclear reactors, and more recently in accelerator facilities. They have a de Broglie wavelength that is on par with the spacing of atoms in solids and molecules and therefore can be used in diffraction experiments that probe the structure of materials.

Thermal neutrons are difficult to detect unless they happen to be absorbed by a nucleus, which then decays to charged particles that can be detected. The most common thermal neutron detector is a tube containing helium-3, which decays to two hydrogen ions when it absorbs a neutron. Although popular, these detectors have two downsides:  they are relatively bulky; and helium-3 is a rare isotope that is becoming increasingly expensive.

Isotopic enrichment
The new neutron detector has been created by Mercouri Kanatzdis and colleagues at Northwestern University and Argonne National Laboratory. At its heart is a 2D semiconductor comprising lithium, indium, phosphorous and selenium (LiInP2Se6). The material is enriched to 95% with the isotope lithium-6, which is normally 8% of naturally-occurring lithium.

Lithium-6 nuclei like to absorb neutrons and decay to tritium and helium-4 ions, which share about 5 MeV of kinetic energy. The lithium-6 decay process delivers more energy than helium-3 or boron-10, which is also used in neutron detectors, and this means that it should create a stronger and less noisy detection signal.

Physicists have developed several schemes for detecting the lithium-6 decays, but all of these have their shortcomings. One design involves embedding lithium-6 in a scintillator in which the ions create flashes of light that can then be detected.

Direct versus indirect conversion
“Scintillation detectors are indirect conversion detectors and require photomultiplier tubes to collect the scintillation light generating by the nuclear reaction, which causes a large volume of the overall detection system, explains Kanatzdis. Instead, Kanatzdis and colleagues have taken a “direct-conversion” approach in which the absorption and detection processes occur in the same material – LiInP2Se6.

“A direct-conversion semiconductor-based thermal-neutron detector can directly convert the neutron events into detectable charges and collect those charges in the same semiconductor medium (without the scintillation process acting as ‘middleman’),” explains Kanatzdis.  “This can increase spatial resolution. The detector volume could be greatly reduced and still exhibit high detection efficiency to thermal neutrons.”

Their detector works much like a conventional semiconductor detector — a biasing voltage is applied across a piece of LiInP2Se6 semiconductor. When a lithium-6 nuclei decays after absorbing a neutron, the helium and hydrogen ions plough through the semiconductor creating mobile electrons and holes. These charges are swept across the semiconductor by the bias voltage and detected as an electrical signal.

Easy integration
Because it is semiconductor based, Kanatzdis says the “detector could be readily integrated into the current semiconductor electronics system with fast processing characteristics and compact size”.

The team used a technique called chemical vapour transport (CVT) to create LiInP2Se6 crystals with an area of about one square centimetre and thicknesses up to 1 mm (see figure). The response of the detector was assessed first using a source of alpha particles (helium-4 nuclei), which deliver approximately the same energy to the semiconductor as neutron-absorption decay events.  The detector showed a very favourable response when compared to the performance of other neutron detectors that have been tested using alpha particles.

Then they studied the response of their detector to a flux of thermal neutrons that was created by moderating the output of a radioactive neutron source. Despite the flux being very low, thermal neutrons were detected. “LiInP2Se6 is the first semiconductor direct thermal neutron detector to demonstrate a resolved, full energy neutron peak above the background,” says Kanatzdis.
The team says that the performance of their detectors could be further boosted by growing larger crystals, which should be possible. Ultimately, they claim that “LiInP2Se6 has the potential to transform neutron detection technology”.

According to Kanatzdis, the detectors could be used to create “more compact neutron spectrometers at facilities like ILL or SPS where elastic and inelastic neutron scattering experiments are done”. Also possible are portable devices for homeland security applications such as the detection of materials such as uranium and plutonium. The compact nature of the detector means that it could be used in radiation safety applications such as personal radiation dosimeters.

“Our LiInP2Se6 detector also demonstrates a negligible gamma-ray sensitivity, meaning it will not create a false alarm by confusing gamma-rays with neutrons,” he adds.