Magnetic Field Gets Up To Speed 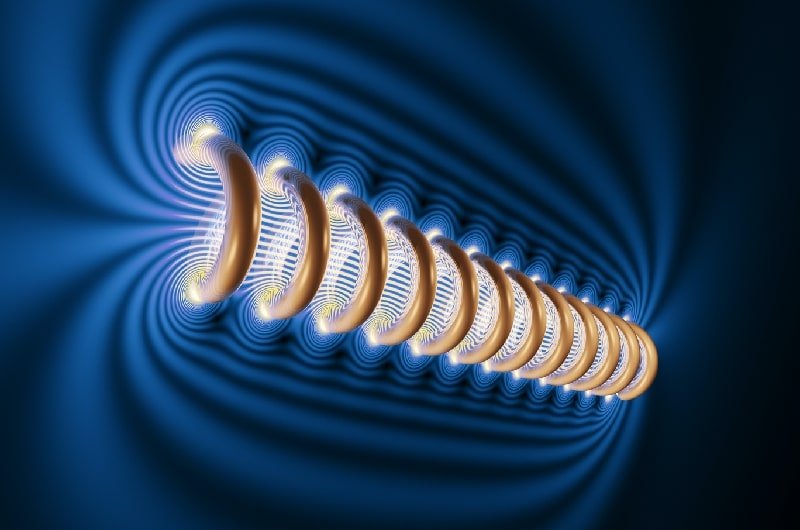 Magnetic field sources have barely changed for decades, yet their uses in fundamental physics research and day-to-day technology have exploded. The conventional coil of wire, or solenoid, cannot ramp up a field rapidly enough to study the fastest magnetic processes, so researchers must go to specialized facilities. But now a team has proposed a lab-scale technique that could produce a field exceeding 8 tesla that turns on in 50 femtoseconds. The idea is to use a pair of laser pulses to force electrons in a plasma to orbit as though in a coil of wire, but without the wire. The new technique could be useful in a wide range of scientific fields, including quantum technologies, atomic and molecular physics, and data storage.

Magnetic data storage has dominated devices from tapes to laptops for decades. Optical information processing, in which light signals replace the electric currents in conventional electronics, is a technology in development that also relies on rapidly switching magnetic fields (to control fast optical signals). Understanding the femtosecond-scale response of materials to magnetic fields would help researchers push the boundaries of these technologies and others.

To study a material’s rapid magnetic response, you need a rapidly changing field. A conventional solenoid generates a field when current passes through its coil of wire, but the field can be changed only on the microsecond timescale, too slow to measure femtosecond processes. You could produce stronger fields more rapidly by ditching the wire and using a laser to directly push the electrons in a plasma around a loop. Previous studies following this approach have required laser intensities that are only possible at major centers, like the National Ignition Facility in California.

Now Paul Corkum and his colleagues at the University of Ottawa and the National Research Council Canada have shown theoretically how to improve the efficiency of the energy transfer from laser to electron. This higher efficiency should allow large and fast magnetic field changes to be produced using the much lower laser intensities available in standard university research labs.

To send electrons in a circular trajectory, previous experimenters have aimed an intense “optical vortex” laser beam into a gas. Each photon in such a beam carries orbital angular momentum that can be delivered to electrons stripped from the atoms in the gas by the laser’s strong electric field. The Ottawa researchers show theoretically that efficiency is greatly improved by instead using a so-called azimuthal vector laser beam. In the beam they modeled, the electric field lines form circles around the beam axis, and the field is most intense in a ring-shaped region. This beam sends electrons orbiting around the ring, so they generate a magnetic field in the direction of the beam.

The technique includes one other essential component: a second laser beam having twice the frequency of the first, which is needed to solve a problem with a single beam. An electron being extracted from an atom by the oscillating laser field acts like a mass being pulled back and forth by a spring. The maximum spring force occurs at the moments when the mass is switching directions and has zero velocity. Likewise, when the electric field is at its peak and most likely to ionize an atom, the electron has zero velocity, and is unable to contribute to a circular current. The second laser field, added to the first with an appropriate phase delay, changes up the timing and allows the electron to move.

The team’s simulations indicate that a combination of an 11.3-microjoule main laser pulse and a 1.9-microjoule frequency-doubled pulse can turn on an 8-tesla field in 50 femtoseconds. While these laser energies are moderate enough to be produced in typical laser labs, they could destroy a sample whose magnetic properties were being measured. The strongest magnetic fields would be generated in the center of the circulating electrons’ orbit, which is in the line of fire of the laser pulses. But the researchers note in their paper that the sample need not be so close, because the strong field will propagate some distance from the plasma.

“This development is a bit like the switch from conventional electromagnets” that occurred when nuclear magnetic resonance (NMR) experiments started using superconducting solenoids, says Mark Freeman, of the University of Alberta in Canada, who studies ultrafast, nanoscale magnetic phenomena. He suggests that just as superconducting magnets enabled MRI to develop from NMR, the technique proposed by Corkum and his colleagues could offer a similar advance for understanding ultrafast processes.