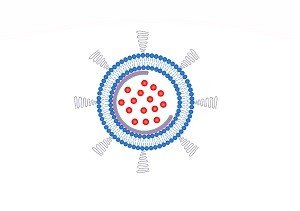 For decades, scientists have explored the use of liposomes –– hollow spheres made of lipid bilayers –– to deliver chemotherapy drugs to tumor cells. But drugs can sometimes leak out of liposomes before they reach their destination, reducing the dose received by the tumor and causing side effects in healthy tissues. Now, researchers report in ACS’ Nano Letters a way to stabilize liposomes by embedding a stiff nanobowl in their inner cavity.

Scientists have tried various approaches to prevent liposomes from leaking, such as coating their surfaces with polymers or crosslinking lipids in their bilayers. However, these modifications can alter the properties of liposomes so that they interact differently with cells. Chao Fang, Jonathan Lovell and colleagues wanted to find a new way to stabilize liposomes that keeps their surfaces intact. They decided to try nanobowls –– concave nanostructures with an opening that would allow drugs to escape once the liposomal bilayers break up inside a cancer cell. They reasoned that by assembling the lipid bilayer around the nanobowl, the rigid structure would mechanically support the liposome.

The team prepared silica nanobowls, modifying their surfaces with a positively charged chemical group and assembling a negatively charged lipid bilayer around each structure. Then, they loaded the chemotherapy drug doxorubicin into the water-filled center. The resulting nanobowl-stabilized liposomes were less leaky than regular liposomes in serum or under sheer stress, as would be encountered in blood vessels, but still released doxorubicin when taken up by cancer cells in a dish. In an experiment with mice that had transplanted, metastatic breast tumors, animals injected with the nanobowl-liposomes lived longer than those receiving regular liposomes. The nanobowl-treated mice also had smaller tumors compared with the group receiving conventional liposomes, and the cancer had not spread to their lungs, in contrast to the other group. The simple, effective method should be “easy for wide application and holds potential for clinical translation,” the researchers say.