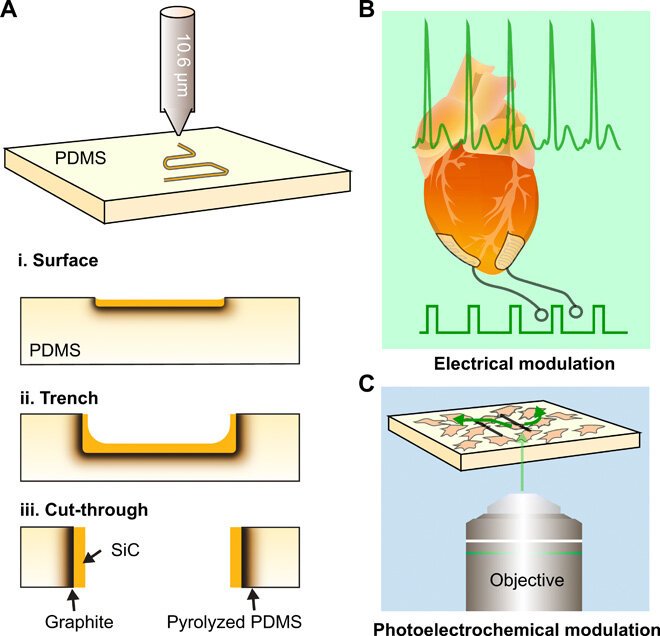 In materials science, conducting and semiconducting materials can be embedded in insulating polymeric substrates for useful biointerface applications. However, it is challenging to achieve the composite configuration directly using chemical processes. Laser-assisted synthesis is a fast and inexpensive technique used to prepare various materials but their applications in the construction of biophysical tools and biomedical materials remain to be explored. In a new report, Vishnu Nair and a research team in chemistry, molecular engineering, physics and atom probe tomography at the University of Chicago and Northwestern University, U.S., used laser writing to convert portions of polydimethylsiloxane (PDMS) into nitrogen-doped cubic silicon carbide (3C-SiC). They facilitated electrochemical and photoelectrochemical activity between the two surfaces by connecting the dense 3C-SiC surface layer to the PDMS matrix using a spongy graphite layer. They developed two-dimensional (2-D) silicon carbide patterns in PDMS and freestanding 3-D constructs. Nair et al. established the function of laser-produced composites by applying flexible electrodes for isolated heart pacing and photoelectrodes for local peroxide delivery to smooth muscle sheets. The work is now published on Science Advances.

Laser-assisted materials synthesis
Materials synthesis via laser-assisted processes are commonly used due to their ease of application, low cost and unique capacity to generate complex phases. Laser-produced composites can expand the design principles to develop materials and devices for biological sensing and activity. For example, scientists had previously used graphene/graphite-based conducting materials using laser writing to electrochemically sense metabolites in sweat. In the present work, the research team selected a material platform besides silicon to perform electronic, electrochemical, photochemical and photothermal control of multiscale biological components. Drawbacks of silicon (Si) include degradation under physiological conditions and limited electrochemical properties. Bioelectronics and biomaterials must facilitate operational flexibility more than structural precision. As a result, there is a demand in biointerface research to incorporate techniques of laser writing or nozzle-based printing to develop frugal and user-friendly materials and devices. 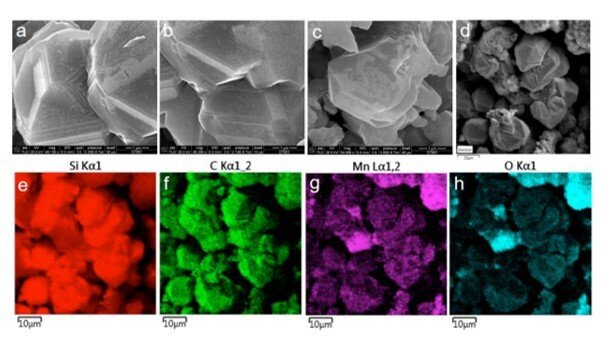 Silicon carbide
Nair et al. used silicon carbide (SiC) in this work due to its importance in the semiconductor industry. The cubic 3C polytype (3C-SiC) displayed high electron mobility, thermal conductivity, and saturation drift velocity, although its synthesis required stringent conditions. The team showed 2-D and 3-D laser patterning of 3C-SiC using PDMS (polydimethylsiloxane) as a precursor. They created a dense SiC layer using laser ablation under a nitrogen-rich atmosphere to produce composites with expected geometries. Together with an embedded graphite network, the SiC showed pseudocapacitive electrochemical behavior and photoelectrochemical activity. The scientists functionalized the SiC with manganese dioxide (MnO2 or MnOx) to improve its photoelectrochemical activity. Using these SiC-based devices, they directed the activity in isolated hearts and in cultured cells. The work showed how laser writing could efficiently produce flexible and multifunctional semiconductor/elastomer interactions for biointerface studies.

Synthesis and structural characterization of silicon carbide
During the experiments, Nair et al. prepared a pure PDMS polymer slab and placed it on a commercial laser cutter platform to ablate the polymer into a pattern of interest. The process converted the material to a yellow solid with a thin, dark layer connection to the PDMS matrix. The team analyzed the structure using dark-field scanning transmission electron microscopy (HAADF-STEM), transmission electron microscopy (TEM) and selected-area electron diffraction (SAED). The results revealed an interface between a densely packed solid layer with well-faceted crystals and a spongy layered lattice network similar to graphite. The results confirmed the one-step synthesis of 3C-SiC connected to PDMS via a spongy graphite network, where a direct laser spot may have promoted the conversion of PDMS to SiC under high temperature, while lower temperature in the surrounding environment led to graphite formation. The resulting thermal gradient-based semiconductor-conductor junction is a requisite configuration for many electrochemical and photoelectrochemical devices.

2-D and 3-D printing and the pseudocapacitive nature of 3C-SiC electrodes
The team controlled the width and depth of the converted lines or trenches on a substrate after a single laser scan for controlled development of a semiconductor/elastomer composite. As proof of concept, they vectorized and printed a 2-D painting on PDMS and detected SiC in the details using Raman mapping. For 3-D printing, they used a layer-by-layer technique of SiC on the cut PDMS and a fresh layer of PDMS on top of it, to achieve interlayer SiC fusion. Using the printed 3C-SiC/graphite/PDMS composites, Nair et al explored the electrochemical properties of 3C-SiC. They accomplished this by preparing an electrode by electrically connecting the graphitic side of a scratched SiC/graphite patch to a copper wire using silver paste. Then they sealed the device and only exposed the densely packed SiC to the electrolyte. The recorded double-layer capacitance and reduced charge transfer resistance will be able to facilitate improved coupling between the composite surface and cells and tissues in biological modulation experiments. 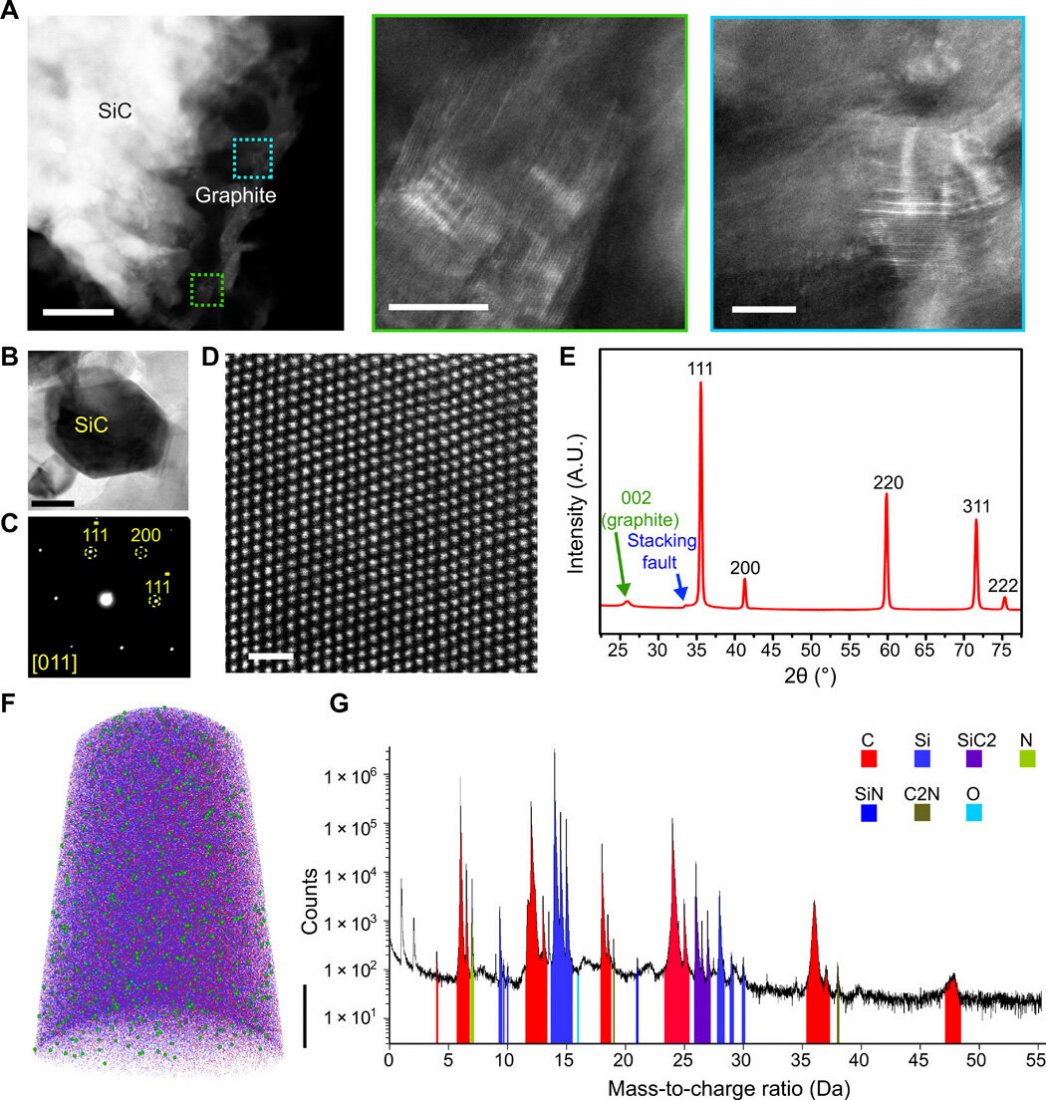 Developing flexible electrochemical electrodes for heart pacing and as photoelectrodes
The scientists then printed and tested the SiC-based flexible bioelectronic devices for tissue stimulation. After mounting a viable contracting rat heart, they placed a flexible SiC device against the left and right ventricles to deliver electrical stimulation to the heart. Upon stimulation, the heart rate simultaneously synchronized to the stimulation rate to disrupt the electrocardiography (ECG) signal indicating a clear overdrive pacing effect. When they ceased electrical stimulation, the heart returned to is slow atrioventricular node rhythm. The experiment showed how the SiC/graphite/PDMS composite was fully applicable for tissue and organ modulation. Nair et al. additionally studied the electrochemical activities of the SiC surface after optical excitation and the results indicated a photoanodic output of the printed 3C-SiC devices. They confirmed the observations via a chemical reaction to oxidize water to hydrogen peroxide and based on the results they proposed further investigations to understand the exact mechanism of the observed catalytic process. Since hydrogen peroxide and other reactive oxygen species typically play an important role to modulate smooth muscle cells, the team studied the effects of H2O2 using 3C-SiC as a reservoir for muscle stimulation. Based on the outcomes they suggest remote therapeutic applications of the device to facilitate vasoconstriction in trauma surgeries or sphincter contraction after chronic spinal cord injury. 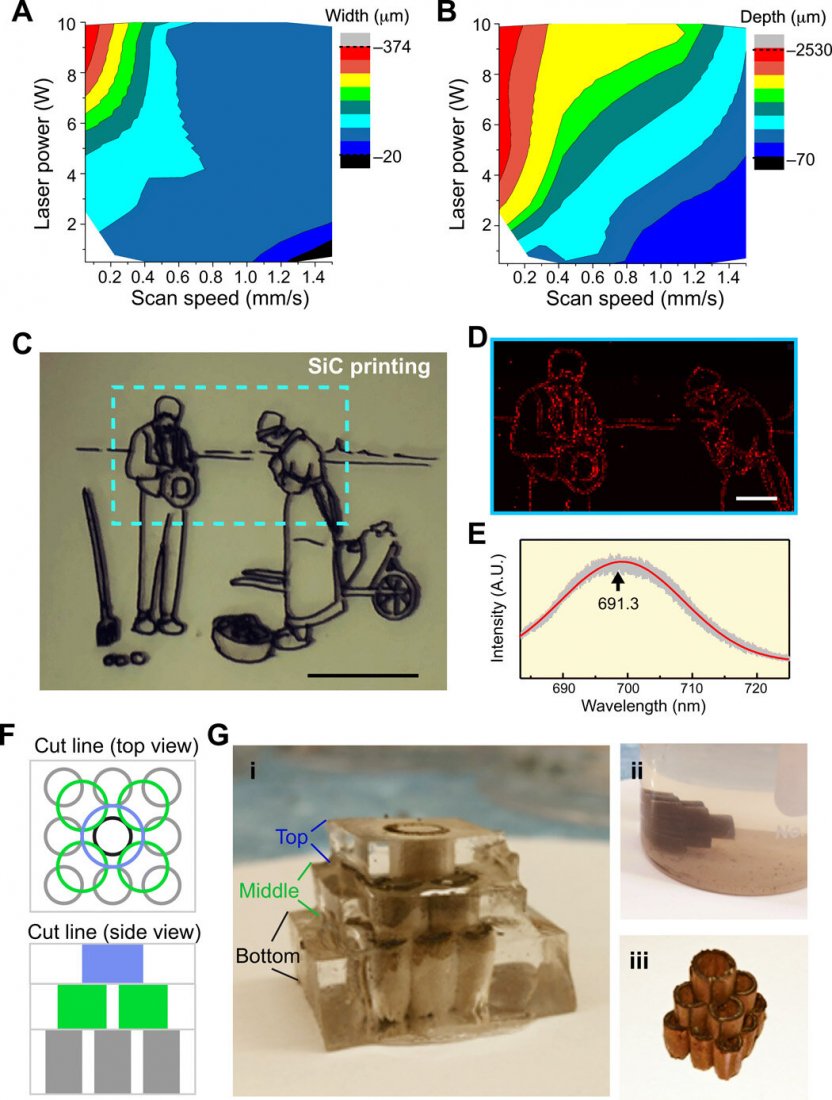 In this way, Vishnu Nair and colleagues demonstrated 2-D and 3-D laser writing of nitrogen-doped 3C-SiC on PDMS substrates. The resulting layer established a seamless hard-soft interface with PDMS. The flexible devices acted as stimulation electrodes for isolated hearts and as photoelectrodes for localized hydrogen peroxide production. The scientists aim to seamlessly integrate the semiconductor/elastomer composites in organ-on-a-chip or organoid-on-a-chip research, or in microfluidics systems for photoelectrochemical activity. Future studies will also precisely investigate the electrochemical mechanism underlying H2O2 production in the device.