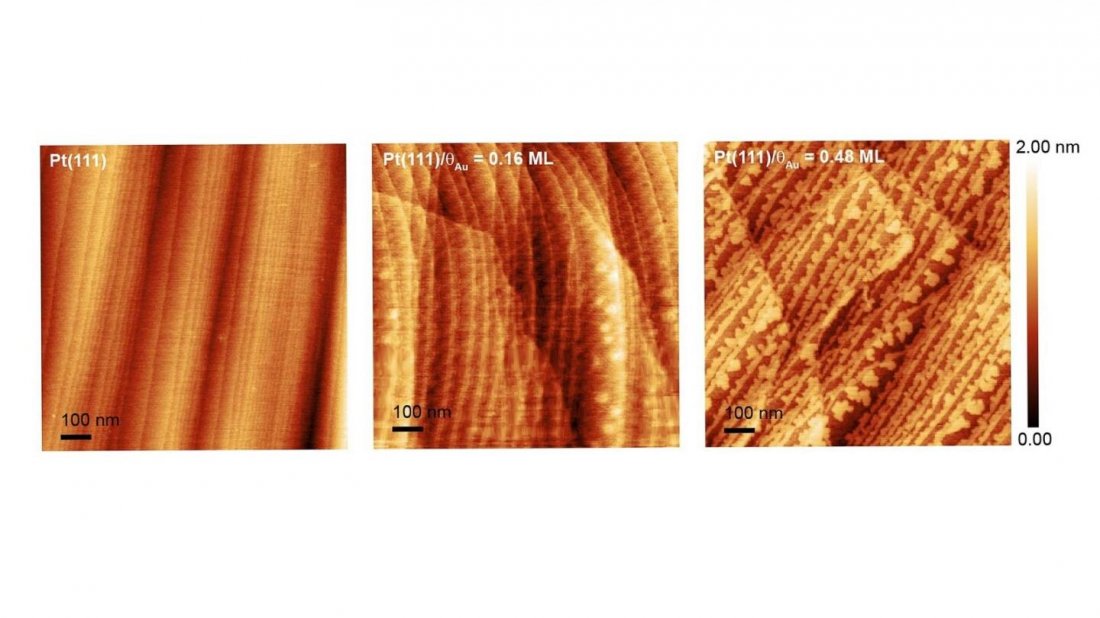 Vehicles powered by polymer electrolyte membrane fuel cells (PEMFCs) are energy-efficient and eco-friendly, but despite increasing public interest in PEMFC-powered transportation, current performance of materials that are used in fuel cells limits their widespread commercialization.

Scientists at the U.S. Department of Energy's (DOE) Argonne National Laboratory led a team to investigate reactions in PEMFCs, and their discoveries informed the creation of technology that could bring fuel cells one step closer to realizing their full market potential.

PEMFCs rely on hydrogen as a fuel, which is oxidized on the cell's anode side through a hydrogen oxidation reaction, while oxygen from the air is used for an oxygen reduction reaction (ORR) at the cathode. Through these processes, fuel cells produce electricity to power electric motors in vehicles and other applications, emitting water as the only by-product.

Platinum-based, nano-sized particles are the most effective materials for promoting reactions in fuel cells, including the ORR in the cathode. However, in addition to their high cost, platinum nanoparticles suffer from gradual degradation, especially in the cathode, which limits catalytic performance and reduces the lifetime of the fuel cell.

The research team, which included DOE's Oak Ridge National Laboratory and several university partners, used a novel approach to examine dissolution processes of platinum at the atomic and molecular level. The investigation enabled them to identify the degradation mechanism during the cathodic ORR, and the insights guided the design of a nanocatalyst that uses gold to eliminate platinum dissolution.

"The dissolution of platinum occurs at the atomic and molecular scale during exposure to the highly corrosive environment in fuel cells," said Vojislav Stamenkovic, a senior scientist and group leader for the Energy Conversion and Storage group in Argonne's Materials Science Division (MSD). "This material degradation affects the fuel cell's long-term operations, presenting an obstacle for fuel cell implementation in transportation, specifically in heavy duty applications such as long-haul trucks."

Starting small
The scientists used a range of customized characterization tools to investigate the dissolution of well-defined platinum structures in single-crystal surfaces, thin films and nanoparticles.

"We have developed capabilities to observe processes at the atomic scale to understand the mechanisms responsible for dissolution and to identify the conditions under which it occurs," said Pietro Papa Lopes, a scientist in Argonne's MSD and first author on the study. "Then we implemented this knowledge into material design to mitigate dissolution and increase durability."

In addition, the scientists relied on a high-precision synthesis approach to create structures with well-defined physical and chemical properties, ensuring that the relationships between structure and stability discovered from studying 2-D surfaces were carried over to the 3-D nanoparticles they produced.

"We performed these studies—from single crystals, to thin films, to nanoparticles—which showed us how to synthesize platinum catalysts to increase durability," said Lopes, "and by looking at these different materials, we also identified strategies for using gold to protect the platinum."

Going for gold
As the scientists uncovered the fundamental nature of dissolution by observing its occurrence in several testbed scenarios, the team used the knowledge to mitigate dissolution with the addition of gold.

The researchers used transmission electron microscopy capabilities at Argonne's Center for Nanoscale Materials and at the Center for Nanophase Materials Sciences at Oak Ridge National Laboratory—both DOE Office of Science User Facilities—to image platinum nanoparticles after synthesis and before and after operation. This technique allowed the scientists to compare the stability of the nanoparticles with and without incorporated gold.

The team found that controlled placement of gold in the core promotes the arrangement of platinum in an optimal surface structure that grants high stability. In addition, gold was selectively deposited on the surface to protect specific sites that the team identified as particularly vulnerable for dissolution. This strategy eliminates dissolution of platinum from even the smallest nanoparticles used in this study by keeping platinum atoms attached to the sites where they can still effectively catalyze the ORR.

Atomic-level understanding
Understanding the mechanisms behind dissolution at the atomic level is essential to uncovering the correlation between platinum loss, surface structure and size and ratio of platinum nanoparticles, and determining how these relationships affect long-term operation.

"The novel part of this research is resolving the mechanisms and fully mitigating platinum dissolution by material design at different scales, from single crystals and thin films to nanoparticles," said Stamenkovic. "It's the insights we gained in conjunction with the design and synthesis of a nanomaterial that addresses durability issues in fuel cells, as well as the ability to delineate and quantify dissolution of platinum catalyst from other processes that contribute to fuel cell performance decay."

The team is also developing a predictive aging algorithm to assess the long-term durability of the platinum-based nanoparticles and found a 30-fold improvement in durability compared to nanoparticles without gold.

A paper on the study, titled "Eliminating dissolution of platinum-based electrocatalysts at the atomic scale," was published on July 20 in Nature Materials.