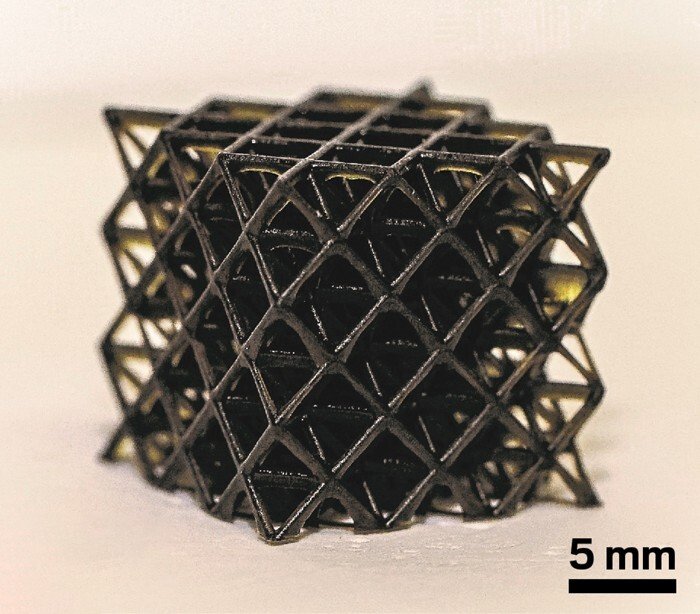 In the world of 3-D printing, the fastest way to craft intricately detailed objects is to use ultraviolet light to convert liquid resins into solid objects. But researchers have now used standard red, green, blue, and violet LEDs in place of UV light to 3-D print objects with speed and detail rivaling that of state-of-the-art printers (ACS Cent. Sci. 2020, DOI: 10.1021/acscentsci.0c00929). This advance could reduce the cost and energy use of 3-D printing and could open up several novel applications, says study author Zachariah Page, a chemist at the University of Texas at Austin.

One could, for instance, produce objects containing nanomaterials that scatter or block UV light, or print materials containing live cells that would be damaged by UV light. Plus, he says, with the right chemistry, you could use different wavelengths to activate different chemical processes in the resin to make multi-material objects.

He and his colleagues developed a three-component system that quickly triggers the solidification of a liquid acrylic resin when excited by visible light. The first component, a photoredox catalyst, absorbs light energy, which kicks its electrons to a higher energy state. The other two components are an iodonium and a borate, which accept and donate electrons from the catalyst, respectively, converting both into radicals that trigger polymerization.

The researchers studied four different known photoredox catalysts, organic compounds that each absorb a different color of light. They shine red, green, blue, or violet LED light, depending on the catalyst being used, on the liquid resin mixture in a pattern to build objects layer by layer. By using two different monomers—poly(dimethyl acrylamide) or 2-hydroxyethyl acrylate—they could make either stiff or soft materials.

The resulting objects have features smaller than 100µm—the field’s threshold for high resolution—and can be printed at a speed of 8 s per layer. “There are some conventional UV-based printers that are faster or higher resolution,” Page says. “But the combination we have is close to state of the art.”

“This is an excellent advance,” says Timothy Long, a chemist at Arizona State University. The beauty of this work, he says, is that it combines “fundamental understanding of the photochemical mechanism with the sophisticated delivery of light to achieve excellent resolutions at a high speed of complex geometries.”

Cyrille Boyer, a polymer chemist at The University of New South Wales, says “this is just a first step towards achieving competitiveness with UV light.” The red and green catalysts, for instance, are sensitive to oxygen in the air, which affects the speed and resolution of the system, so the printing might need to be done in an inert gas enclosure.

Page says he and his team are working on that issue. Adding oxygen-consuming molecules to the resin could enable printing in ambient conditions, for instance. And the team is also working on improving the speed and resolution by using higher intensity light.