09/11/2020 Researchers in South Korea and the US have borrowed a strategy traditionally used in photovoltaic devices to enhance a battery concept that generates an electric current from beta particles. The team behind the work say it is a step towards making long-lasting batteries for very small devices.

Betavoltaic cells use a radioactive isotope, in this case carbon-14, to generate beta radiation. Ordinarily such devices contain a semiconductor that absorbs the radiation to generate electrons. Now, a team led by Su-Il In from the Daegu Gyeongbuk Institute of Science and Technology has replaced the semiconductor with a titanium dioxide electrode coated with a ruthenium-based dye. The cell reported by In’s team uses a beta-emitting carbon-14 quantum dot layer on the counter electrode, and uses a dye-coated electrode as the anode. 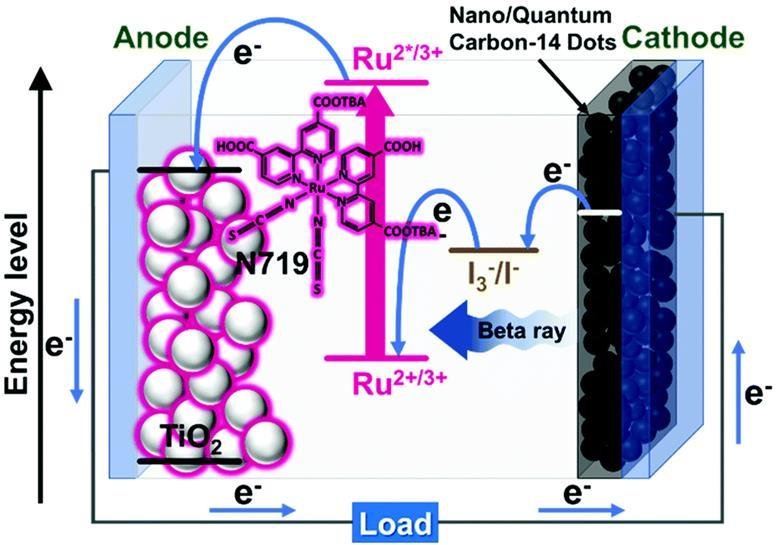 In the new betavoltaic cell, energy provided by beta radiation causes charge transfer from the dye’s ruthenium metal ions to its ligand, and that leads to electron-transfer to the titanium dioxide anode. ‘I think that merging old and new technology to solve the problems with beta batteries will be useful for our future,’ says In.

The dye-sensitised device performed much better than the device without any dye – it generated 32,000 times more electrons. Additionally, In says using a dye ‘instead of an expensive and complicated process using a semiconductor,’ reduces the manufacturing cost by roughly 30%.

‘The dual role of the carbon-14 quantum dot layer as both the radioactive excitation source and the counter electrode is particularly innovative’, comments Yana Vaynzof, an expert in photovoltaic cell technology from the Technical University of Dresden, Germany.

Vaynzof adds that ‘significant hurdles remain to be overcome, both in increasing the efficiency of the device and equally importantly, its stability.’ The cell’s efficiency is currently 0.48%, which is not yet high enough for widespread commercialisation.

In’s team aim to improve the efficiency of the dye-sensitised betavoltaic cell in their future research, and In says the technology could ultimately be used to construct self-sustaining battery cells that require little to no charging.