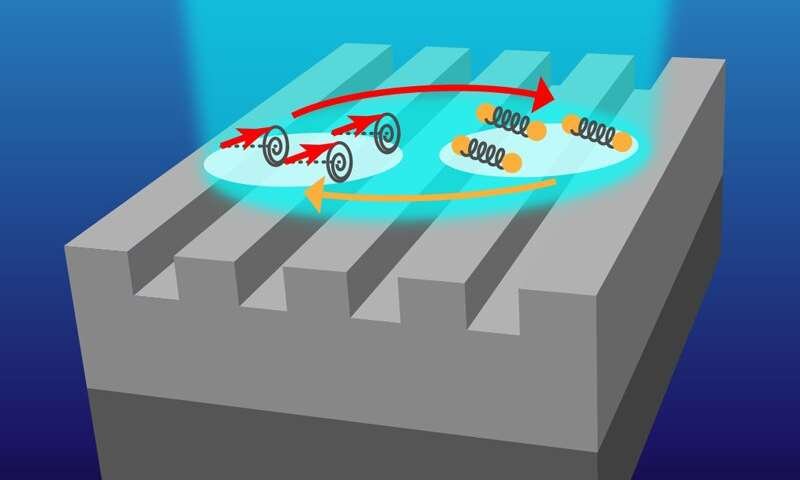 A team of physicists from Germany, Russia, Ukraine and the United Kingdom has found a new way to observe magnon-polarons by using a nanopatterned magnetic structure lit with short laser pulses. In their paper published in the journal Physical Review B, the group describes extending prior research involving magnon-polarons to develop a better method for observing magnon polarons.

Magnons are quantized spin waves that carry information, but because they are difficult to manipulate, there have been no practical applications. Polarons are quasiparticles that have been used by researchers to study interactions between atoms and electrons in solid materials. Both magnons and polarons are the subject of research efforts aimed at packing more information into smaller spaces (for computers, smartphones, etc.) Some of that research has involved using phonons (lattice deformations) to excite magnons. In such work, energy is transferred in just one direction. In more recent work, researchers have produced mutual interactions that result in the formation of magnon-polarons, hybrid quasiparticles that are no longer either phonons or magnons.

Devices capable of working with magnon-polarons remained elusive until last year, when a team at Lawrence Berkeley National Laboratory used a nanomagnet to observe a magnon-polaron. This is believed to be a necessary step for creating a device that could make use of them. In this new effort, the researchers have built on that effort by developing a more sophisticated apparatus that allowed them to view a magnon-polaron for a longer period of time and in more detail.

The new apparatus was made by first carving grooves into a thin film made of Galfenol. The grooves on the surface of the film served as a means for impacting the spatial distribution of phonons and magnons. The team then used a pump probe to observe magnons and phonons as they interacted during formation of magnon-polarons. A secondary pulse probe was then applied as a means of measuring reflectivity. The final step was applying a magnetic field to tune the frequency of the mode of the magnon. In addition to allowing the researchers an opportunity to watch as magnon-polarons formed, the apparatus allowed them to tune the hybrids as they were formed to create a stronger hybridization between them.