Superconductivity Discovered In Extra-Terrestrial Objects For The First Time 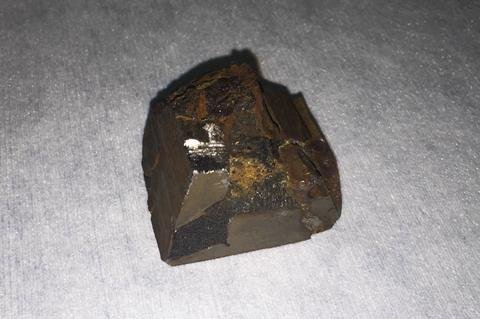 Superconducting alloys have been discovered in two meteorites, marking the first time superconductivity has ever been found in objects from beyond Earth.

Superconductors are materials that, when cooled to a critical temperature, conduct electricity without resistance. Applications include the powerful magnets in MRI machines, mass spectrometers and particle accelerators.

Superconductivity rarely occurs naturally on Earth because materials don’t form in their pure phase. So scientists have studied the properties of various metals and alloys to design and make superconductors in the lab. But some researchers have been hoping to find them elsewhere.

‘Meteorites are particularly promising places to look for unusual materials because they are formed under such extreme conditions,’ says James Wampler, a postdoctoral researcher in Ivan Schuller’s lab at the University of California San Diego in the US. ‘They can be formed at high pressure and temperature, have extremely long cooling rates and be heavily shocked or be exposed to high amounts of radiation.’

During their search, Wampler and colleagues have discovered superconducting alloys comprising indium, lead and tin in two very different meteorites. The superconducting properties of these elements and each of the binary alloys – such as lead–tin – are not new to science. But finding the alloys in meteorites is a first.

‘We were hopeful that we would find superconductive materials, but finding these alloys was surprising,’ says Wampler. ‘These elements exist in meteors but the alloys had not been found in meteorites previously and astronomers were surprised.’

Given the different characteristics of the two meteorites, it suggests superconductivity exists in other meteorites, and elsewhere in the universe. Knowing this could help cosmologists better understand the structure of space objects, planet formation, and the shape and origin of magnetic fields.

The team made the discovery after analysing 15 meteorites using an ultrasensitive technique called magnetic field modulated microwave spectroscopy (MFMMS). This detects minute quantities of superconductive material in larger samples very quickly, akin to using a metal detector to find a needle in a haystack. However, it doesn’t pinpoint where the superconducting material is in the sample.

When the researchers detected superconductivity in two meteorites, they then used a ‘divide and conquer’ approach that involved breaking samples into grains. These were re-measured with MFMMS until the superconducting material was isolated. Further measurements and microscopy techniques identified the materials’ superconducting phases as alloys of indium, lead and tin.

‘Such a discovery in an extra-terrestrial material is of course phenomenal, as it speaks to the expanse of this phenomena in our universe and raises interesting questions about its role in astrophysical processes,’ comments Johnpierre Paglione who studies superconductivity at the University of Maryland, US. ‘This work is novel, but also a fine example of how superconductivity is omnipresent in our world and beyond.’