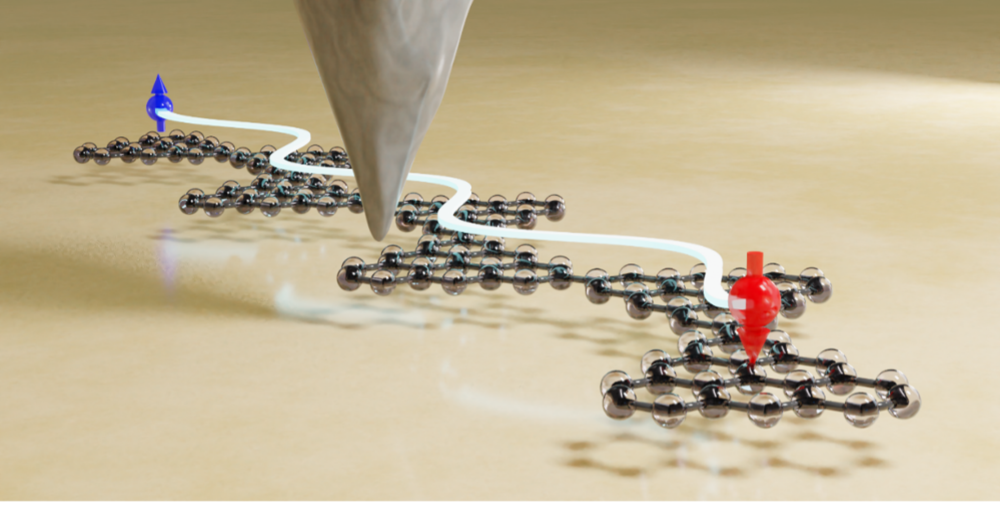 Artistic rendering of a triangulene quantum spin chain adsorbed on a gold surface and probed with the sharp tip of a scanning tunneling microscope. While each triangulene unit has a total spin of 1, quantum correlations in the chain lead to spin fractionalization, such that the terminal triangulene units exhibit a spin of ½. Image: Empa

We are all used to the idea that simpler units in nature interact to form complex structures. Take, for example, the hierarchy of life, where atoms combine to form molecules, molecules combine to form cells, cells combine to form tissues, and so on, ultimately leading to the formation of complex organisms such as humans. In the quantum world, however, this process may play in reverse, where interactions between two complex objects lead to the emergence of simpler species.

All elementary particles have a ‘spin’, a fundamental property that governs their interaction with magnetic fields. Spins are quantized, which means they can only assume discrete values. Electrons have the smallest possible spin that can take two discrete values, while the next simplest systems are those whose spin takes three discrete values – these are dubbed spin ½ and spin 1, respectively. In the 1980s, it was predicted that a one-dimensional chain of interacting spin 1 units should be ‘fractionalized’, such that the terminal units of the chain behave, counterintuitively, like spin ½ objects. Therefore, much like magicians who seem to saw a person in two halves and pull them apart, quantum correlations in the chain divide a spin 1 in two spin ½ entities.

Testing this prediction in a laboratory has been challenging for various reasons, chief among them being that conventional materials are not one-dimensional. While indirect evidence of spin fractionalization has been seen in crystals of organometallic chains containing transition metal ions, a direct observation of the phenomenon has remained elusive.

Now, an international team of researchers has found a remarkable route to accomplish this feat. Combining organic chemistry and ultra-high vacuum surface science, the team fabricated chains of a triangular polycyclic aromatic hydrocarbon with spin 1, known as triangulene. Using a scanning tunneling microscope the team then probed magnetic excitations of these spin chains on a gold surface. They found that beyond a certain length, the terminal triangulene units of the chains exhibited Kondo resonances – which are a characteristic spectroscopic fingerprint of spin ½ quantum objects in contact with a metal surface.

From chains to networks – and to quantum computers?

The researchers are convinced that easily and directly accessible molecular spin systems exhibiting strongly correlated behaviour of electrons will become a fertile playground for developing and testing new theoretical concepts. In addition to exploring linear spin chains, scientists are also focusing on two-dimensional networks of quantum magnets. Such spin networks are a promising material platform for quantum computation.