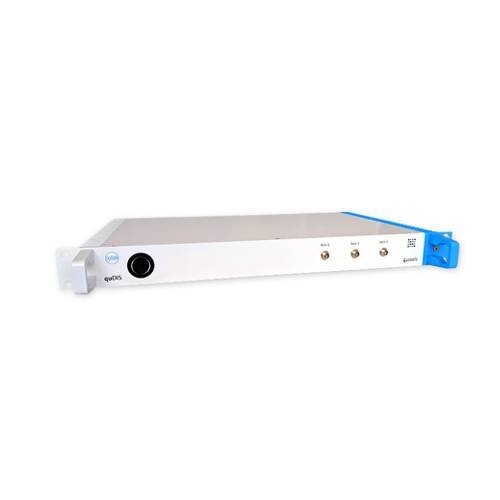 View in
get a quote

The quDIS is a confocal displacement sensor based on an interferometer with high signal stability and a contrast independent measuring algorithm. Next to relative and absolute distance measurement with a bandwidth of 25 kHz in free space, vacuum or glass rods and fibers as cavities, vibration analysis is also possible. Different sensor heads based on Fabry-Pérot or Michelson interferometer configurations are available for a wide range of applications.

The quDIS is a confocal displacement sensor with a high signal stability and a contrast independent measurement algorithm. The quDIS is based on a laser interferometer like Fabry-Pérot or Michelson setups. Its high precision is required in various high-end applications in science and industry. 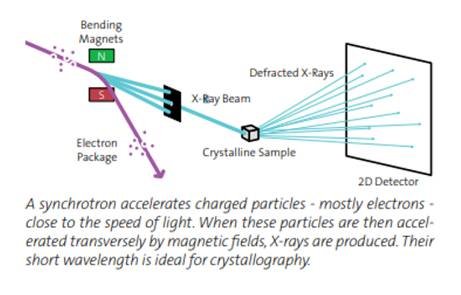 In synchrotrons, charged particles like electrons are accelerated to very high speeds and then laterally deflected once or multiple times at regular intervals by bending magnets and other insertion devices. The X-rays produced by the acceleration of these charged particles are emitted in dozens of thin beams, directed at a beamline adjacent to the accelerator. A synchrotron can generate a much more focused, or brilliant, beam of radiation with highest intensities. 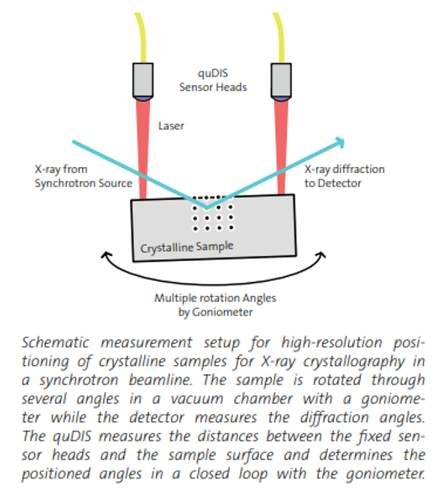 The X-rays in a beamline hit a crystalline sample and get diffracted by its lattice. By rotating the sample through several angles in a vacuum chamber while the X-ray detector measures the diffraction angles, the crystalline structure can be analyzed.

In this application, the quDIS displacement sensor measures the distances between the fixed sensor heads and the sample surface and determines the positioned angles of the sample. It measures the movement of the goniometer stage in a closed-loop setup with sub-nanometer accuracy

Thermal deformation of a satellite in simulated space environment 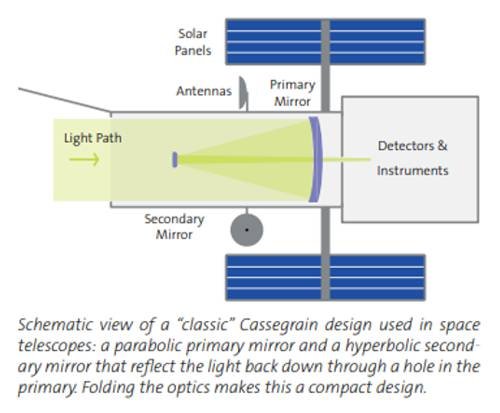 A space telescope is superior to a ground-based one because there is no light pollution or atmospheric aberrations, providing a more stable image, and offering unprecedented angular resolution over a large field. The disadvantages are the high costs and difficult maintenance, therefore the design and the construction must be very carefully prepared.

A Cassegrain reflector, like most large professional telescopes, has a parabolic primary mirror and a hyperbolic secondary mirror that reflects light back down through a hole in the primary. The mirrors and optical systems determine the final performance. Optical telescopes typically have mirrors polished to an accuracy of about a tenth of the desired wavelength.

The metering truss, e.g. a graphite-epoxy frame, is the optical telescope assembly and keeps the working parts of the telescope firmly aligned. It must be able to withstand the frequent changes from direct sunlight to the darkness of the Earths shadow, resulting in large temperature fluctuations, and at the same time be stable enough to allow extremely accurate alignment of the telescope. It is surrounded by multi-layer insulation that keeps the temperature inside the telescope stable.

The design and materials of the measuring truss and its response to the harsh environment in space must be tested on Earth. By enclosing the entire structure, controlling parameters such as temperature and pressure, and measuring the deformation with multiple quDIS axes, the deformation can be determined under simulated conditions.


In this case, twelve quDIS axes were used to measure the deformation of the cylindrical measuring truss in multiple directions with the highest precision and low drift over a long period of time.