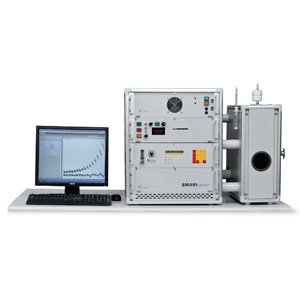 Examples of important molecular dynamics information which can be obtained through FFC NMR relaxometry:
SMARTracer

SMARtracer™ is an innovative, cost-effective, Fast Field Cycling NMR instrument designed to measure the field dependence of the NMR longitudinal spin-lattice relaxation time, T1. The transverse spin-spin relaxation time, T2, may also be measured.
(see note)
The SMARtracer™ 0.25 tesla system allows measurement of NMRD profiles from 10 kHz to 10 MHz (1H Larmor frequency) and is capable of measuring fluorine as well as the proton nucleus.
SMARtracer™ is the ideal instrument to exploit the high quantity of information contained in the NMRD profiles acquired by means of Fast Field Cycling NMR relaxometry techniques, in clinical and industrial applications.

Wide Bore Configuration
SPINMASTER can also be configured with the Stelar Wide Bore 0.5 tesla magnet for measuring large samples such as rock cores. 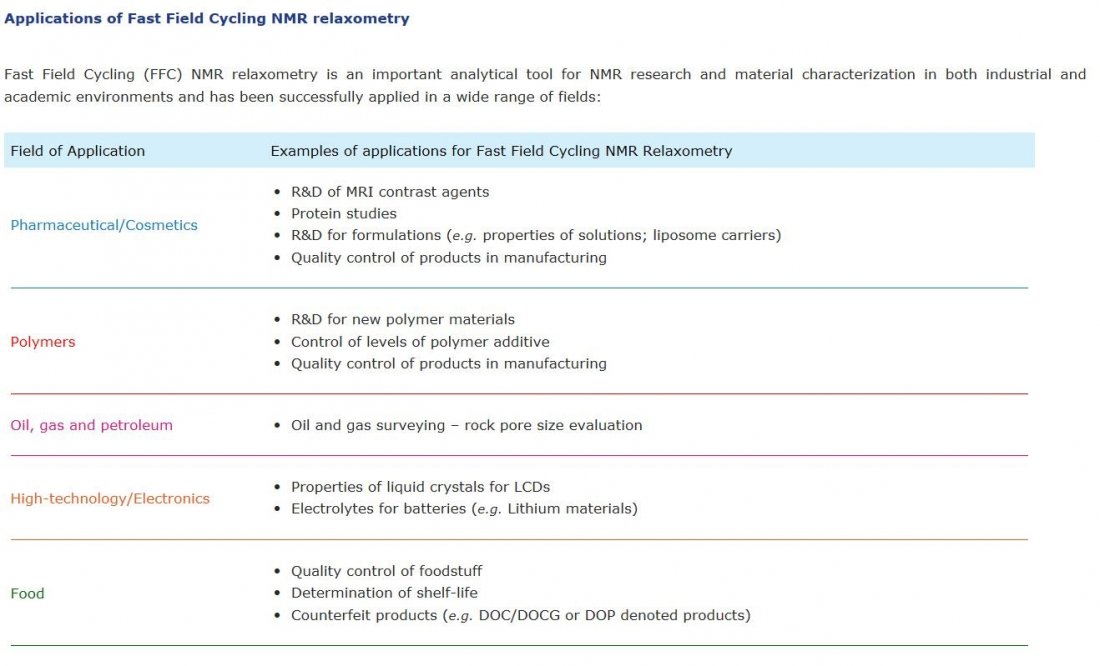 Examples of important molecular dynamics information which can be obtained through FFC NMR relaxometry:

The magnetic field dependence of 1/T1 of any given substance or material is shown in the graphical form as a Nuclear Magnetic Resonance Dispersion (NMRD) profile. The NMRD shown below shows the different profiles of a foodstuff before (black squares, unspoiled) and after it has expired (red dots, spoiled). 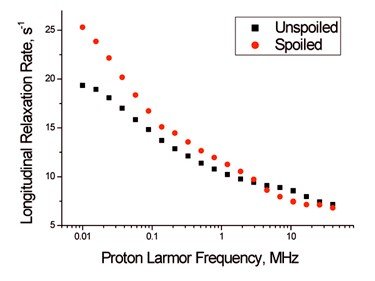 The relaxation rate 1/T1 of a substance or material will tend to change when there is a variation in molecular dynamics, which may be caused by the following:

Relation of NMRD to molecular dynamics

Molecular dynamics are generally rotational or translational motions that are modeled as small angle or small step translational jumps which occur randomly in time. The random functions of time are usually characterized by a time correlation function that characterizes the conditional probability that if there is a particular orientation or position at time t, what is the probability at time (t + τ) later? For Brownian rotational diffusion, the correlation function decays exponentially:

Where B2 is the strength of the coupling modulated and τc is the correlation time for the molecule to diffuse approximately one radian. Nuclei are relaxed by the transition induced by these fluctuating fields at the Larmor frequency (single quantum) and twice the Larmor frequency (double quantum) spin flips. What motions are important depends on the magnetic field strength experienced by the nuclei. The more intense the fluctuations are near the Larmor frequency, the faster the spins relax. The frequency dependence of the fluctuation intensity, i.e., the power spectrum or the spectral density, is the Fourier transform of the time correlation function. For rotation this becomes,

Which to within a constant has the form

Thus, the Nuclear Magnetic Resonance Dispersion (known as NMRD or MRD) maps the Larmor frequency dependence of the spectral density function that is related directly, by the Fourier transform, to the time correlation function characterizing molecular motions. Any motion that causes changes in the local fields contributes to the relaxation process including rotation, translation and chemical exchange among different chemical or physical environments.

A critical feature of NMRD is that it is possible to map spectral densities as low as 5-10 kHz which corresponds to a time regime in the vicinity of 30 microseconds, i.e., well into the range of chemical exchange events. Variations of the method permit exploration to lower frequencies.

Fast Field Cycling (FFC) Nuclear Magnetic Resonance (NMR) relaxometry is a measurement of the nuclear spin-lattice relaxation rate constant as a function of the applied magnetic field strength that provides a unique characterization of the local molecular dynamics of molecules over a wide frequency range.

The spin-lattice-relaxation-rate constant (1/T1) characterizes the time dependence of the approach to thermal equilibrium for the nuclear spin magnetization if it is perturbed from equilibrium in a magnetic field. The process involves an exchange of energy between the nuclear spin energy and the other degrees of freedom in the system collectively called the lattice, even in a liquid. This energy exchange requires photons of energy corresponding to transitions between the nuclear spin energy levels that are a linear function of the magnetic field strength. The fluctuations that cause the coupling derive from molecular motions in the system ranging from vibrations at the highest frequencies to global fluctuations at the lowest frequencies. Varying the magnetic field strength varies the frequencies sampled by the relaxation rate measurement. By varying the magnetic field over wide ranges, it is possible to map the power spectrum of the fluctuations from a few kHz to hundreds of MHz corresponding to a time scale range from tens of microseconds to hundreds of ps. Incorporation of a paramagnet in the system permits exploration of dynamics to the sub picoseconds domain. One may think of nuclear magnetic relaxation dispersion (NMRD) as the magnetic analog of dielectric dispersion; however, NMRD has the distinct advantage that one generally has no difficulty identifying the origin of the motions that drives spin relaxation. 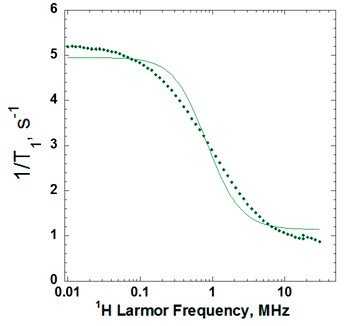 The solid curve is a fit to the data assuming a single rotational unit (monomer). The fit fails because the solution is severely aggregated. As a consequence of the aggregation, the inflection point is shifted a decade to lower Larmor frequencies corresponding to much larger rotational units than a monomer, and the dispersion is broadened which reports through the rotational correlation times the distribution of apparent molecular sizes. The weighting of the contributions to the NMRD profile is proportional to the rotational correlation time, thus, the larger aggregates make a much larger contribution to the relaxation rate constant than the smaller ones.

The relaxation dispersion profiles for cross-linked bovine serum albumin samples at different compositions shown in semilogarithmic (a) and log-log (b) presentations. 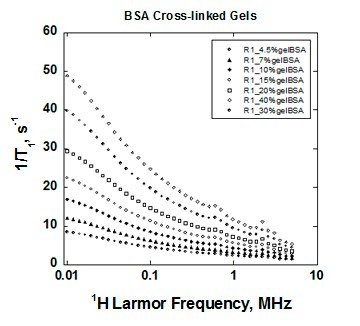 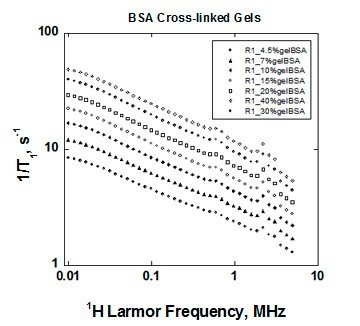 The dispersion is predominantly a power law in the Larmor frequency for the rotationally immobilized protein cases or very large aggregates.

Practical difference between a fixed field magnet and a FFC relaxometer

The NMRD profiles below, measured with a Stelar FFC NMR relaxometer, show three different weight distributions of polyethylene glycol (PEG) melts (blue squares 8,000 Da, black squares 20,000 Da, red squares 35,000 Da). This demonstrates how the ability to measure nuclear spin relaxation over a wide range of magnetic field strengths, and especially at very low magnetic fields, can be of advantage. It would be difficult to distinguish between these three different polymers at magnetic field strengths higher than 0.1 MHz. 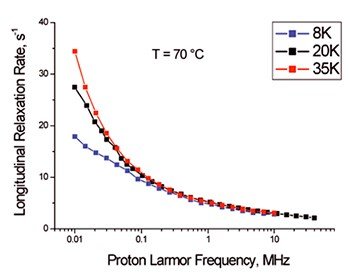 Technical difference between the fixed field and the NMRD experiment

The key difference between the fixed field experiment and the NMRD experiment is that the NMRD profile provides a test of the theory used to interpret the data in terms of the molecular dynamics in the system. Rotational motions are a simple example. The relaxation rate constant may be written for relaxation induced by rotational Brownian motion as:

The measurement of the field dependence characterizes the rotational correlation time, τ, as well as the strength of the coupling, B2, driving relaxation. However, one does not need to know B2 to extract the dynamical information because it derives from the Larmor frequency dependence entirely. In the fixed field experiment, the Larmor frequency, ω, is fixed. In this case, to extract τ, one needs to know B2 accurately. Further, there is no test of the assumptions in the theory for the fixed field measurement, but in the NMRD experiment, if the theory is inappropriate, it will not faithfully fit the NMRD profile.

How does the FFC experiment work?

FFC NMR relaxometry is a non destructive method requiring a small amount of a solid or liquid sample (enough to fill a standard 10mm NMR tube to a volume of around 1cm3) with no other form of preparation required. The Stelar wide bore magnet is able to accommodate larger samples such as rock cores or even small animals.

The basic FFC NMR experiment consists of cycling the Zeeman field, B0, which is applied to the sample, through three different values: 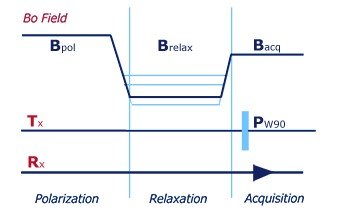 All Stelar relaxometers come with a specialized software which will guide the user through the FFC experiment and calculate the necessary running time.