Identification of the wettability of graphene layers at the molecular level

Graphene is a two-dimensional material in which carbon atoms are arranged in hexagonal structures, and it has unique physical and chemical properties such as sub-nanometer thickness, chemical stability, mechanical flexibility, electrical and thermal conductivity, optical transparency, and selective permeability to water. Due to these properties, various applications of graphene in transparent electrodes, desalination, electrical energy storage, and catalysts have been vigorously studied.

Because graphene is an extremely thin material, for practical uses, it has to be deposited on top of other materials that serve as substrate. One of the research subjects which is of great scientific interest is how graphene on a substrate interacts with water. Wettability is the ability of the interfacial water to maintain contact with a solid surface, and it depends on the material's hydrophobicity. Unlike most materials, the wettability of graphene varies depending on the type of substrate. More specifically, the wettability of the substrate is weakly affected by the presence of a single graphene layer on its surface. Such a peculiar wettability of graphene has been described by the term "wetting transparency" because the wetting properties at the graphene-water interface have little effect on the substrate-water interaction through the thin graphene.

There have been numerous water contact angle (WCA) measurements to study the wettability of graphene on various types of substrates. WCA is a commonly used method to measure the hydrophobicity of the material since the contact angle between the water droplet and material increases as the material becomes more hydrophobic. These studies have hinted that while the wettability of graphene monolayer is notably transparent, the graphene becomes increasingly hydrophobic as the number of layers increases. However, WCA measurement can only provide information on the macroscopic properties of the graphene-water interface, and it cannot give a detailed picture of interfacial water at the graphene-water interface. 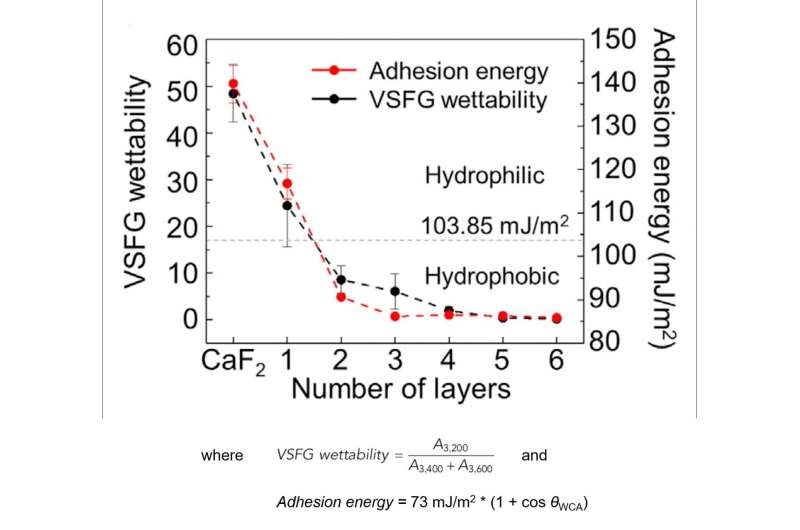 The calculated VSFG wettability is plotted against adhesion energy from macroscopic observation of WCA. Both values coincide closely and indicate increasing hydrophobicity as the number of graphene layers increases. Credit: Institute for Basic Science

Furthermore, other techniques such as Raman spectroscopy or reflection-based infrared spectroscopy, which have been commonly used for measuring microscopic properties, are not of use for selectively observing the interfacial water molecules. That is because the vibrational spectroscopic signal of interfacial water molecules are completely masked by the huge signal from bulk water. As a result, it is not entirely surprising that there has been a dearth of molecular-level studies in this area of graphene research.

Recently, a research team at the Center for Molecular Spectroscopy and Dynamics (CMSD) within the Institute for Basic Science (IBS) in Seoul, South Korea and the Korea University revealed the origin of the wettability of graphene. The team succeeded at observing the hydrogen-bond structure of water molecules at graphene-water interfaces using a technique called 'vibrational sum-frequency generation spectroscopy (VSFG)'. VSFG is a second-order nonlinear spectroscopy that can be used to selectively analyze molecules with broken centrosymmetry. It is an ideal method for studying the behavior and structures of water molecules at the graphene interface since the water molecules in the bulk liquid are not visible due to their isotropic distribution of molecular orientations.

The research team observed the VSFG spectra of water molecules on a multi-layer graphene covering a calcium fluoride (CaF2) substrate. They were able to track changes in the hydrogen bond structure of water molecules. When there were four or more layers of graphene, a characteristic peak at ~3,600 cm-1 started to appear in the VFSG spectra. This peak corresponds to the water molecules with the dangling -OH groups that do not form hydrogen bonds with neighboring water molecules, which is a characteristic feature that has been commonly found for water at the hydrophobic interface. This result is the first observation showing the molecular-level structure of water at the water-graphene interface. 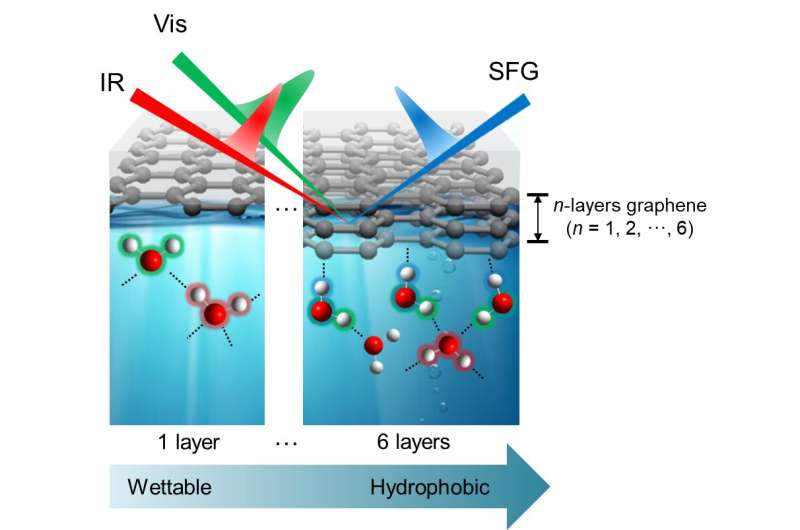 In addition, the researchers compared the VSFG wettability value that they could calculate from the measured spectra to the estimated adhesion energy that is related to the measured WCAs. They found that both properties are highly correlated with each other. This observation suggests that the VSFG could be an incisive tool for studying the wettability of two-dimensional materials at the molecular level. It also showed the possibility of using VSFG as an alternative to measuring the adhesion energy of water on buried surfaces, where measuring the water contact angle is difficult or even impossible.

The first and second authors Kim Donghwan and KIM Eunchan Kim note: "This study is the first case describing the increasing hydrophobicity of the graphene surface at a molecular level depending on the number of graphene layers," and "Vibrational sum-frequency generation spectroscopy could be used as a versatile tool for understanding the properties of any functional two-dimensional materials."

Prof. Cho Minhaeng, the Director of CMSD, notes: "For applications where graphene is utilized in water solution, the hydrophobicity of the interface is one of the key factors in determining the efficiency of graphene layers for various application. This research is expected to provide basic scientific knowledge for an optimal design of graphene-based devices in the future."