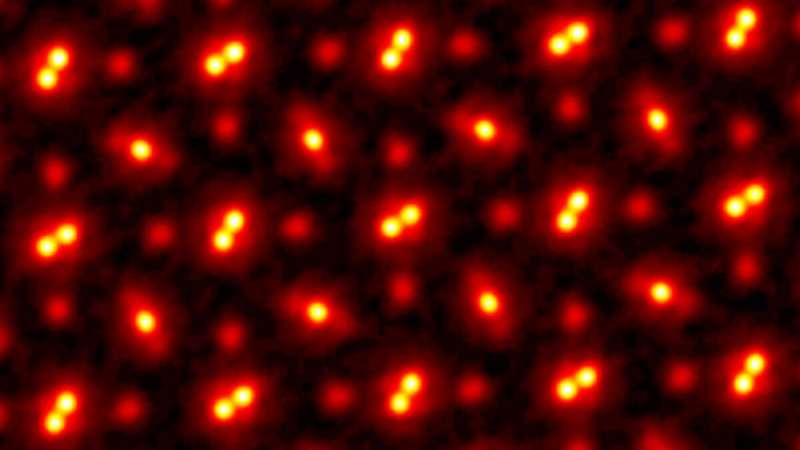 In 2018, Cornell researchers built a high-powered detector that, in combination with an algorithm-driven process called ptychography, set a world record by tripling the resolution of a state-of-the-art electron microscope.

As successful as it was, that approach had a weakness. It only worked with ultrathin samples that were a few atoms thick. Anything thicker would cause the electrons to scatter in ways that could not be disentangled.

Now a team, again led by David Muller, the Samuel B. Eckert Professor of Engineering, has bested its own record by a factor of two with an electron microscope pixel array detector (EMPAD) that incorporates even more sophisticated 3D reconstruction algorithms.

The resolution is so fine-tuned, the only blurring that remains is the thermal jiggling of the atoms themselves.

"This doesn't just set a new record," Muller said. "It's reached a regime which is effectively going to be an ultimate limit for resolution. We basically can now figure out where the atoms are in a very easy way. This opens up a whole lot of new measurement possibilities of things we've wanted to do for a very long time. It also solves a long-standing problem—undoing the multiple scattering of the beam in the sample, which Hans Bethe laid out in 1928—that has blocked us from doing this in the past."
Ptychography works by scanning overlapping scattering patterns from a material sample and looking for changes in the overlapping region.

"We're chasing speckle patterns that look a lot like those laser-pointer patterns that cats are equally fascinated by," Muller said. "By seeing how the pattern changes, we are able to compute the shape of the object that caused the pattern."

The detector is slightly defocused, blurring the beam, in order to capture the widest range of data possible. This data is then reconstructed via complex algorithms, resulting in an ultraprecise image with picometer (one-trillionth of a meter) precision.

"With these new algorithms, we're now able to correct for all the blurring of our microscope to the point that the largest blurring factor we have left is the fact that the atoms themselves are wobbling, because that's what happens to atoms at finite temperature," Muller said. "When we talk about temperature, what we're actually measuring is the average speed of how much the atoms are jiggling."

The researchers could possibly top their record again by using a material that consists of heavier atoms, which wobble less, or by cooling down the sample. But even at zero temperature, atoms still have quantum fluctuations, so the improvement would not be very large.

This latest form of electron ptychography will enable scientists to locate individual atoms in all three dimensions when they might be otherwise hidden using other imaging methods. Researchers will also be able to find impurity atoms in unusual configurations and image them and their vibrations, one at a time. This could be particularly helpful in imaging semiconductors, catalysts and quantum materials—including those used in quantum computing—as well as for analyzing atoms at the boundaries where materials are joined together.

The imaging method could also be applied to thick biological cells or tissues, or even the synapse connections in the brain—what Muller refers to as "connectomics on demand."

While the method is time-consuming and computationally demanding, it could be made more efficient with more powerful computers in conjunction with machine learning and faster detectors.

"We want to apply this to everything we do," said Muller, who co-directs the Kavli Institute at Cornell for Nanoscale Science and co-chairs the Nanoscale Science and Microsystems Engineering (NEXT Nano) Task Force, part of Cornell's Radical Collaboration initiative. "Until now, we've all been wearing really bad glasses. And now we actually have a really good pair. Why wouldn't you want to take off the old glasses, put on the new ones, and use them all the time?"