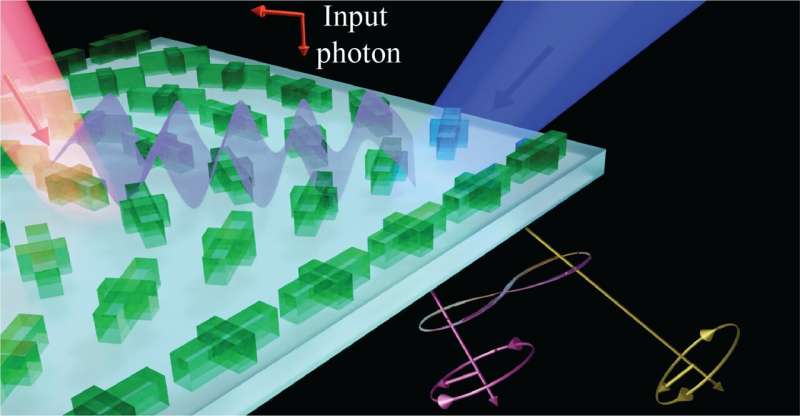 A team of scientists at Los Alamos National Laboratory proposes that modulated quantum metasurfaces can control all properties of photonic qubits, a breakthrough that could impact the fields of quantum information, communications, sensing and imaging, as well as energy and momentum harvesting. The results of their study were released yesterday in the journal Physical Review Letters, published by the American Physical Society.

"People have studied classical metasurfaces for a long time," says Diego Dalvit, who works in the Condensed Matter and Complex Systems group at the Laboratory's Theoretical Division. "But we came up with this new idea, which was to modulate in time and space the optical properties of a quantum metasurface that allow us to manipulate, on-demand, all degrees of freedom of a single photon, which is the most elementary unit of light."

Metasurfaces are ultrathin structures that can manipulate light in ways not usually seen in nature. In this case, the team developed a metasurface that looked like an array of rotated crosses, which they can then manipulate with lasers or electrical pulses. They then proposed to shoot a single photon through the metasurface, where the photon splits into a superposition of many colors, paths, and spinning states that are all intertwined, generating so-called quantum entanglement -- meaning the single photon is capable of inheriting all these different properties at once.

"When the metasurface is modulated with laser or electrical pulses, one can control the frequency of the refracted single photon, alter its angle of trajectory, the direction of its electric field, as well as its twist," says Abul Azad from the Center for Integrated Nanotechnologies at the Laboratory's Materials Physics and Applications Division.

By manipulating these properties, this technology could be used to encode information in photons traveling within a quantum network, everything from banks, quantum computers, and between Earth and satellites. Encoding photons is particularly desirable in the field of cryptography because "eavesdroppers" are unable to view a photon without changing its fundamental physics, which if done would then alert the sender and receiver that the information has been compromised.

The researchers are also working on how to pull photons from a vacuum by modulating the quantum metasurface.

"The quantum vacuum is not empty but full of fleeting virtual photons. With the modulated quantum metasurface one is able to efficiently extract and convert virtual photons into real photon pairs," says Wilton Kort-Kamp, who works in the Theoretical Division at the Lab's Condensed Matter and Complex Systems group.

Harnessing photons that exist in the vacuum and shooting them in one direction should create propulsion in the opposite direction. Similarly, stirring the vacuum should create rotational motion from the twisted photons. Structured quantum light could then one day be used to generate mechanical thrust, using only tiny amounts of energy to drive the metasurface.