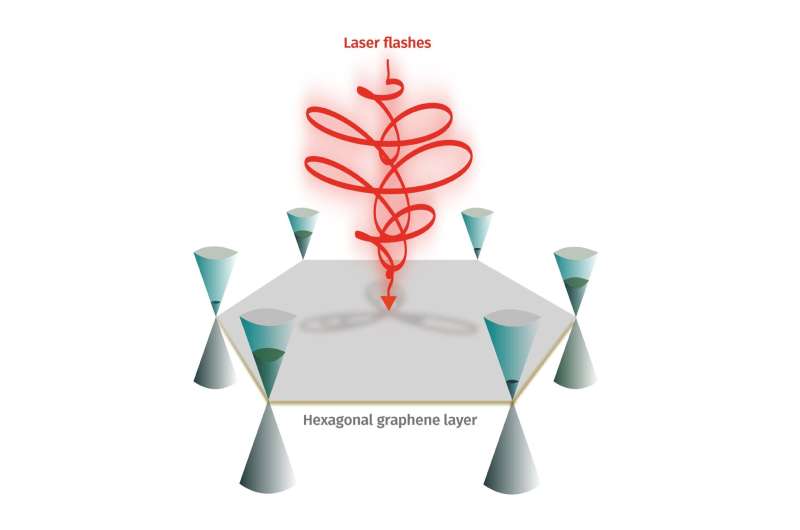 Valleytronics is an emerging field in which valleys—local minima in the energy band structure of solids—are used to encode, process, and store quantum information. Though graphene was thought to be unsuitable for valleytronics due to its symmetrical structure, researchers from the Indian Institute of Technology Bombay, India, have recently shown that this is not the case. Their findings may pave the way to small-sized quantum computers that can operate at room temperature.

From the consumer's side, it's pretty easy to notice the giant strides that the field of electronics has made over the past few decades; with wearable gadgets, smart cities, self-driving cars, improved space missions, robots, holography, and supercomputers, the possibilities of technological advancement seem infinite. However, unbeknownst to most people, this accelerated trend of technological advancement fueled by electronics is rapidly coming to a halt as electronic components reach their practical limits. If we are to keep improving our computing power and capacity, we will need to find new ways to store and process data beyond the simple flow and charge of electrons, which is how modern electronics operates.

So quantum computers have recently become a hot topic. By encoding information in quantum phenomena, quantum computers transcend the binary notion of each bit being either "0" or "1." Instead, quantum bits exist as superpositions of "0" and "1" and can therefore take intermediate values. By exploiting superpositions through carefully designed algorithms, quantum computers could theoretically outperform conventional computers by several orders of magnitude in terms of speed. Sadly, it has proven difficult to find suitable quantum phenomena to encode information at room temperature. Existing computers, such as those owned by Google, IBM, and Microsoft, have to be kept at ultralow temperatures below –196.1 degrees Celsius, which makes them costly and impractical to operate.

Fortunately, there is a very promising approach for encoding quantum information that is actively being explored: valleytronics. Aside from their charge, electrons have another parameter that can be manipulated, namely their "valley pseudospin," which is the valley that the electron occupies. These so-called valleys are local minima in the energy bands of solids, which dictate the energetic state and location of electrons. Valleys, with their occupation state governed by quantum mechanics, can be used to encode, process, and store quantum information at less restrictive temperatures.

Recently, a team of scientists from the Indian Institute of Technology (IIT) Bombay, India, and Max-Born Institut, Germany, achieved a breakthrough in the field of valleytronics. In their latest study, published in Optica, they present a way to perform valley operations in monolayer or pristine graphene, which was assumed to be impossible by other researchers in the field. As the poster child of carbon nanomaterials, graphene is made from carbon atoms in a hexagonal pattern and bears a plethora of favorable properties. Atomically thin layers of graphene have electron valleys but, due to the material's inherent symmetry, they were deemed useless for valley operations.

Despite the odds, the team came up with a strategy to break graphene's valley symmetry using light. Associate Professor Gopal Dixit from IIT Bombay, who led the study, explains: "By tailoring the polarization of two beams of light according to graphene's triangular lattice, we found it possible to break the symmetry between two neighboring carbon atoms and exploit the electronic band structure in the regions close to the valleys, inducing valley polarization." In other words, this enables the use of graphene's valleys to effectively "write" information. Dr. Dixit also highlights that the flashes of light can cause electrons to wiggle several hundred trillion times a second. In theory, this means valleytronics at petahertz rates is possible, which exceeds modern computational speeds by a million times.

One of the most attractive aspects of conducting valley operations in graphene is that it's possible to do so at room temperature. "Our work could open the door to miniature, general-purpose quantum computers that can be used by regular people, much like laptops," remarks Dr. Dixit. With the higher computational speeds provided by quantum computers, it will be much quicker to perform molecular simulations, big data analysis, deep learning, and other computationally intensive tasks. In turn, this will accelerate the development of new drugs and the elucidation of molecular structures, which will help in the search for cures to complex diseases including COVID-19.