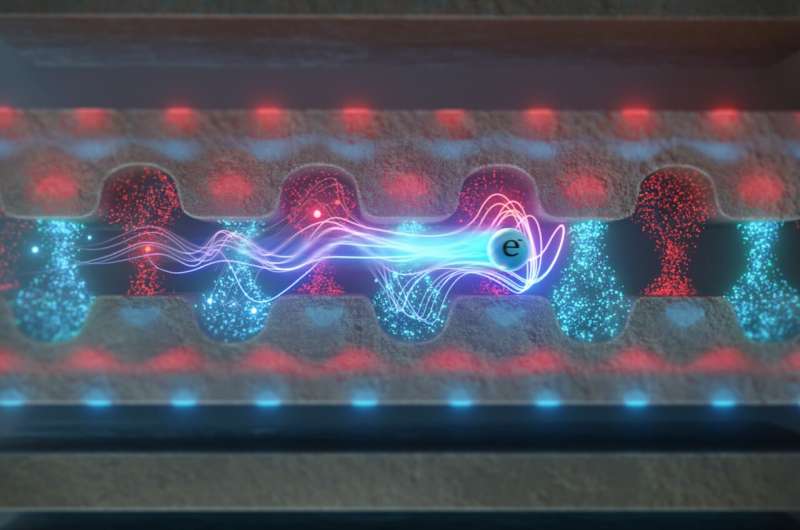 An artist’s depiction of the ACHIP structure and the interaction in it. A silicon-photonics device integrated in an electron microscope provides efficient electron interactions with CW light, enabling the detection of the quantum photon statistics. Depending on the photon statistics of light, the electron becomes entangled with the light when passing through a silicon-photonic channel. The image uses the exact design of the silicon-photonic accelerator, and also uses the exact field distribution inside it to depict the photonic field distribution. Credit: SimplySci Animations, Urs Haeusler, and the AdQuanta group at the Technion.

For several decades, physicists have known that light can be described simultaneously as a wave and a particle. This fascinating 'duality' of light is due to the classical and quantum nature of electromagnetic excitations, the processes through which electromagnetic fields are produced.

"The idea for our study first came to us around two years ago, after our experimental discovery that the interaction between a free electron and light can maintain its coherence over distances of a hundred times the optical period," Raphael Dahan, Alexey Gorlach and Ido Kaminer, three of the researchers who conducted the study, told Phys.org via email. "Around this time, two important theoretical works also came out, both of which explored how the quantum properties of light should change the interaction with electrons."

These two previous theoretical studies, one by Ofer Kfir at University of Göttingen and the other by Javier García de Abajo and his colleagues at Institut de Ciències Fotòniques (ICFO), predicted a new type of fundamental interaction that occurs between light and free electrons, revealing the quantum properties of light. Drawing inspiration from these important predictions, Kaminer, Dahan, Gorlach and their colleagues started searching for a system in which they would be able to investigate this interaction experimentally. More specifically, the researchers wanted to demonstrate that the quantum statistics of light can alter the electron–light interaction.
"This led us to look for two important components," Kaminer, Dahan and Gorlach explained. "The first is a device that will have better coupling between the electron and the light, and the second is a photonic source that will generate quantum light with the highest possible intensity."

To achieve a greater coupling efficiency, the researchers consulted with members of the accelerator on-chip (ACHIP) research community, which aims to achieve compact electron acceleration using lasers and integrate it on-chip. After a series of calculations, the team found that the coupling efficiency can be enhanced in hundred times compared to what was suggested by all previous experiments.

"We first collaborated with a group from Stanford (Solgaard, England, Leedle, Byer, and their students) – they designed and provided us with an ACHIP structure for the first test," Kaminer, Dahan and Gorlach said. "This became the first experiment using a silicon-photonic chip inside a transmission electron microscope, and already had fascinating implications, resulting in another paper which will soon appear in PRX, by Yuval Adiv et al."

Subsequently, Kaminer and his colleagues initiated a collaboration with another part of the ACHIP community, a team led by Peter Hommelhoff at Erlangen Germany. This research group provided the best-In-the-world ACHIP structures necessary for Kaminer to conduct this complicated experiment.

To generate intense quantum light, the researchers worked closely with the Eisenstein group at Technion. This group allowed them to use a special kind of optical amplifier: an instrument that can change the quantum photon statistics of light from a Poissonian distribution (as in classical coherent light) to a super-Poissonian distribution.

"Our study was quite a journey," Dahan said. "Combining all these different elements and through a very challenging experiment using our ultrafast transmission electron microscope, we achieved our primary objective: demonstrating the first interaction between a free electron and light with different quantum properties."

Kaminer and his colleagues were ultimately able to unveil the quantum nature of the interaction between photons and free electrons by continuously changing the photon statistics throughout their experiment and showing how the electron energy spectrum changes in response. The change in the photon statistics they observed varied depending on the intensity of the pump and laser seed in the optical amplifier.

The primary interaction the researchers explored is the one involving the input light and free electrons. In their experiments, electrons act as the detectors of the state of light. Thus, by measuring their energy, the researchers were able to extract quantum information about light.

The electron measurements can only be explained by quantizing both the electron and the light, as predicted by the theoretical papers they drew inspiration from. "Only once using this new theory, the agreement with our measurements became very good," Kaminer said. "From a fundamental perspective, the main findings of our study are: the interaction between quantum light and a free electron, the emergence of entanglement in the interaction and the quantum-classical correspondence principle. This principle shows the effect of a quantum walk by the electron and its transition into a random walk."

In addition to potentially paving the way for new light-related physics research, the experimental evidence could inform the development of several new technologies. This includes non-destructive and non-invasive imaging tools that can collect high-resolution images.

"Firstly, we showed that one can use free electrons to measure the quantum photon statistics of light," Kaminer, Dahan and Gorlach said. "There are several advantages of such measurements that could be demonstrated in the future, for example, being non-destructive, having high temporal resolution, and happening in the nearfield with high spatial resolution."
The recent work by Kaminer and his team proves that it is possible to temporarily shape electrons using continuous wave (CW) light. This result could enable the integration of silicon-photonic chips into electron microscopes to enhance the capabilities of electron microscopy, for instance, to introduce attosecond time resolution into state-of-the-art microscopes without harming their spatial resolution.

"We now plan to continue our work in two main research directions," Kaminer, Dahan and Gorlach said. "The first is working toward full quantum state tomography of photonic nearfields, like measuring squeezing of light on-chip with no need to out-couple the light. Another direction that we are looking into is creating quantum light using coherently-shaped electrons, following the vision we laid out in our recent theory paper that suggested this direction."