The observation of correlated states and superconductivity in twisted trilayer graphene 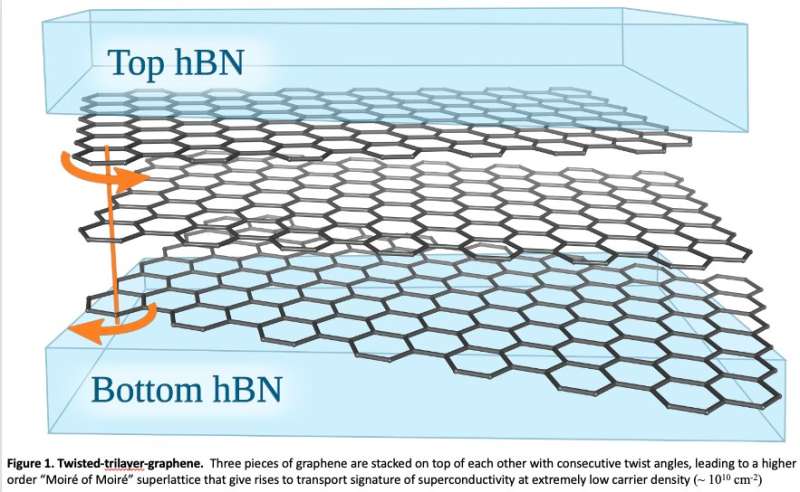 When two layers of graphene or of other two-dimensional (2D) materials are stacked on top of each other with a small angle misalignment, the crystal lattices produced by each layer are spatially 'out of synch'. This results in a unique structural pattern known as moiré superlattice.

In recent years, many physicists have been investigating the properties and characteristics of moiré superlattices, as they have been found to be particularly promising for the development of new quantum technologies. Most of these studies have focused on twisted bilayer graphene, a material comprised of two layers of graphene stacked on top of each other and rotated by a small twist angle.

Researchers at University of Minnesota and Harvard University have recently carried out a study investigating the properties of twisted trilayer graphene, which consists of three stacked layers of graphene with two consecutive small twist angles. Their paper, published in Physical Review Letters, offer evidence of correlated insulating states and the transport signature of superconductivity in the material.

"It was previously demonstrated that twisted bilayer graphene can become superconducting with a precisely-tuned twist angle," Ke Wang, one of the researchers who carried out the study, told Phys.org. "The twisted-bilayers are highly tunable in terms of material parameters and electrostatics, which allows new insights towards understanding correlated electron physics, and promises new potential quantum electronics applications."

By adding a third layer of graphene, Wang and his colleagues produced a structure that they dubbed 'moiré of moiré' superlattice. They then examined this structure and tried to better understand its properties and characteristics.

"Our recent work adds a 3rd layer of graphene to form a twisted-trilayer," Wang explained. "The two superlattices from layer 1-2 and layer 2-3 are again 'out-of-synch', giving rise to a higher order superlattice, which we refer to as 'moiré of moiré superlattice'. We then cool the system down to low temperature (10mK - 20K) and study its electronic transport behavior."

The higher order 'moiré of moiré superlattice' in twisted-trilayer graphene appears to exhibit highly intricate physics, both structurally and electronically. For instance, the material exhibits the transport signature of superconductivity at an extremely low electron density (~ 1010 cm-2), two orders of magnitude smaller than electron densities reported in previous papers.

In the future, the new material studied by this team of researchers could prove to be highly valuable for the fabrication of new technology, particularly quantum electronics and computing platforms. Moreover, the findings gathered by Wang and his colleagues could inspire other research teams to also study the potential of twisted trilayer graphene or of other systems that might give rise to a 'moiré of moiré' superlattice.

"The material we unveiled could be a promising atomically-clean superconductor that can be electrostatically tuned with extremely low carrier density change, which is desirable for future quantum electronic devices," Wang added. "To better understand its potential applications, we now plan to study the structural properties of twisted-trilayer graphene using various microscopy techniques and fabricate gate-defined nanostructures to probe and manipulate novel quantum phenomena that could arise from the system."