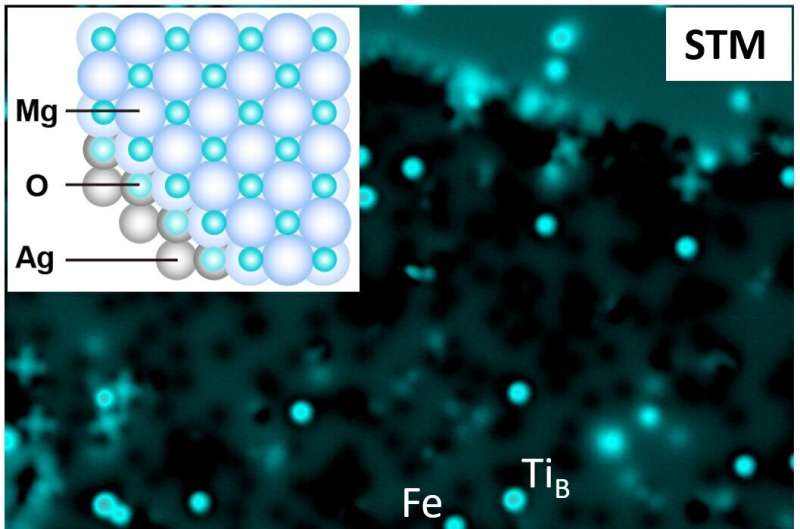 Scaling down information devices to the atomic scale has brought the interest of using individual spins as a basic unit for data storage. This requires precise detection and control of spin states and a better understanding of spin-spin interactions.

For the first time ever, scientists at the IBS Center for Quantum Nanoscience at Ewha Womans University (QNS) have imaged the spin of an individual molecule using electron spin resonance in a scanning tunneling microscope. This achievement, published this month in Nature Chemistry, harnessed the power of synthetic chemistry to control the electron spin of a molecule.

A scanning tunneling microscope (STM) has the ability to see exact atomic structures, atom by atom, at a level that is not possible with other techniques. This study uses an electric microwave applied to the STM tip to drive electron spin resonance (ESR) on single molecules and investigate the magnetic interaction between two molecules using this technique.

Fe, Ti atoms, and FePc molecules were co-deposited on the surface of a thin magnesium oxide film grown on a silver substrate. They were then imaged and probed using an STM equipped with ESR capabilities. This work has extended the ESR experimental platform from single atoms to a much broader class of matter—magnetic molecules, which brings many more possibilities to perform quantum control on single magnetic molecules.

Electron spin resonance is widely employed in biology and chemistry to determine the structure of unknown molecules and to measure the dynamic properties of spins in these molecules. ESR is a cousin of magnetic resonance imaging (MRI) that most people are familiar with from hospital visits. ESR is also an essential tool in the emerging research field of quantum-coherent nanoscience, where the quantum properties of spins are utilized for quantum computation and quantum information science.
"It is impressive to see that the intermolecular interaction can be investigated with an energy resolution in the nano-electron volt precision. Certainly, we should explore more unknowns with this fantastic ESR-STM technique," says Yu Wang of QNS.