A new dimension in magnetism and superconductivity launched 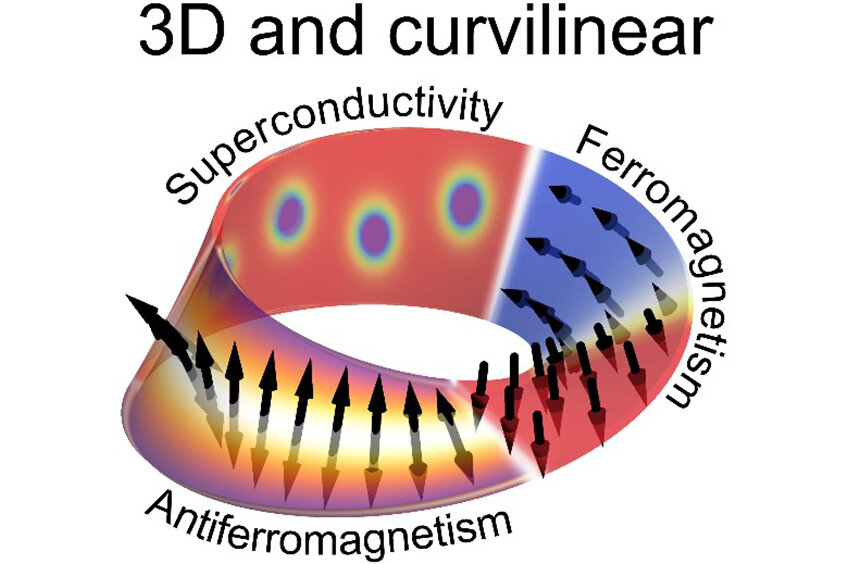 An international team of scientists from Austria and Germany has launched a new paradigm in magnetism and superconductivity, putting effects of curvature, topology, and 3D geometry into the spotlight of next-decade research. | New paper in "Advanced Materials."

Traditionally, the primary ﬁeld, where curvature is playing a pivotal role, is the theory of general relativity. In recent years, however, the impact of curvilinear geometry enters various disciplines, ranging from solid-state physics over soft-matter physics to chemistry and biology, giving rise to a plethora of emerging domains, such as curvilinear cell biology, semiconductors, superﬂuidity, optics, plasmonics and 2D van der Waals materials. In modern magnetism, superconductivity and spintronics, extending nanostructures into the third dimension has become a major research avenue because of geometry-, curvature- and topology-induced phenomena. This approach provides a means to improve conventional and to launch novel functionalities by tailoring the curvature and 3D shape.

"In recent years, there have appeared experimental and theoretical works dealing with curvilinear and three-dimensional superconducting and (anti-)ferromagnetic nano-architectures. However, these studies originate from different scientific communities, resulting in the lack of knowledge transfer between such fundamental areas of condensed matter physics as magnetism and superconductivity," says Oleksandr Dobrovolskiy, head of the SuperSpin Lab at the University of Vienna. "In our group, we lead projects in both these topical areas and it was the aim of our perspective article to build a "bridge" between the magnetism and superconductivity communities, drawing attention to the conceptual aspects of how extension of structures into the third dimension and curvilinear geometry can modify existing and aid launching novel functionalities upon solid-state systems."

"In magnetic materials, the geometrically-broken symmetry provides a new toolbox to tailor curvature-induced anisotropy and chiral responses," says Denys Makarov, head of the department "Intelligent Materials and Systems" at the Helmholtz-Zentrum Dresden-Rossendorf. "The possibility to tune magnetic responses by designing the geometry of a wire or magnetic thin ﬁlm, is one of the main advantages of the curvilinear magnetism, which has a major impact on physics, material science and technology. At present, under its umbrella, the fundamental ﬁeld of curvilinear magnetism includes curvilinear ferro- and antiferromagnetism, curvilinear magnonics and curvilinear spintronics."

"The key difference in the impact of the curvilinear geometry on superconductors in comparison with (anti-)ferromagnets lies in the underlying nature of the order parameter," expands Oleksandr Dobrovolskiy. "Namely, in contrast to magnetic materials, for which energy functionals contain spatial derivatives of vector ﬁelds, the description of superconductors also relies on the analysis of energy functionals containing spatial derivatives of scalar ﬁelds. While in magnetism the order parameter is the magnetization (vector), for a superconducting state the absolute value of the order parameter has a physical meaning of the superconducting energy gap (scalar). In the future, extension of hybrid (anti-)ferromagnet/superconductor structures into the third dimension will enable investigations of the interplay between curvature effects in systems possessing vector and scalar order parameters. Yet, this progress strongly relies on the development of experimental and theoretical methods and the improvement of computation capabilities."

Challenges for investigations of curvilinear and 3D nanomagnets and superconductors

Generally, effects of curvature and torsion are expected when the sizes or features of the system become comparable with the respective length scales. Among the various nanofabrication techniques, writing of complex-shaped 3D nano-architectures by focused particles beams has exhibited the most signiﬁcant progress in the recent years, turning these methods into the techniques of choice for basic and applications-oriented studies in 3D nanomagnetism and superconductivity. However, approaching the relevant length scales in the low nm range (exchange length in ferromagnets and superconducting coherence length in nanoprinted superconductors) is still beyond the reach of current experimental capabilities. At the same time, sophisticated techniques for the characterization of magnetic conﬁgurations and their dynamics in complex-shaped nanostructures are becoming available, including X-ray vector nanotomography and 3D imaging by soft X-ray laminography. Similar studies of superconductors are more delicate as they require cryogenic conditions, appealing for the development of such techniques in the years to come.