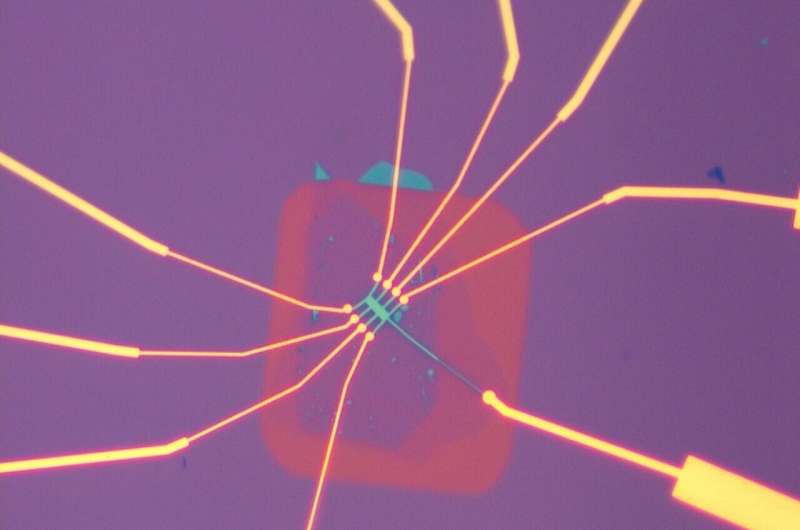 An optical image of the device created by the researchers. Credit: Jaoui et al.

Magic-angle twisted bilayer graphene (MATBG) is a graphene-based material with a unique structure, consisting of two graphene sheets layered on top of each other with a misalignment of approximately 1.1°. This unique structure has been found to host various interesting states, including correlated insulating states and unconventional superconductivity.

Past studies examining MATBG also unveiled the emergence of what is known as a "strange" metal regime in the proximity of the superconducting dome, as well as a significantly enhanced electron-phonon coupling. While these observations were confirmed by later works, the exact mechanisms underpinning them remain unclear.

Researchers at the Barcelona Institute of Science and Technology, the National Institute for Material Sciences, and Massachusetts Institute of Technology (MIT) have recently taken a closer look at these properties of MATBG using a different, low temperature phase diagram than those utilized in previous works. Their paper, published in Nature Physics, gathered new valuable insight about the material's quantum critical behavior.

"Early reports on the electrical transport properties of twisted bilayer graphene revealed two fascinating features: the emergence of a so-called 'strange' metal regime in the vicinity of the superconducting dome and a sharply enhanced electron-phonon coupling," Alexandre Jaoui, one of the researchers who carried out the study, told Phys.org. "Yet, both features share, under certain conditions, a common signature: a linear-in-temperature resistivity. One question that arose was: can a single microscopic mechanism, electrons scattering off phonons, account for both previous observations? Or is this signature, in the low temperature region, pointing to the existence of additional scattering centers affecting charge carriers?" 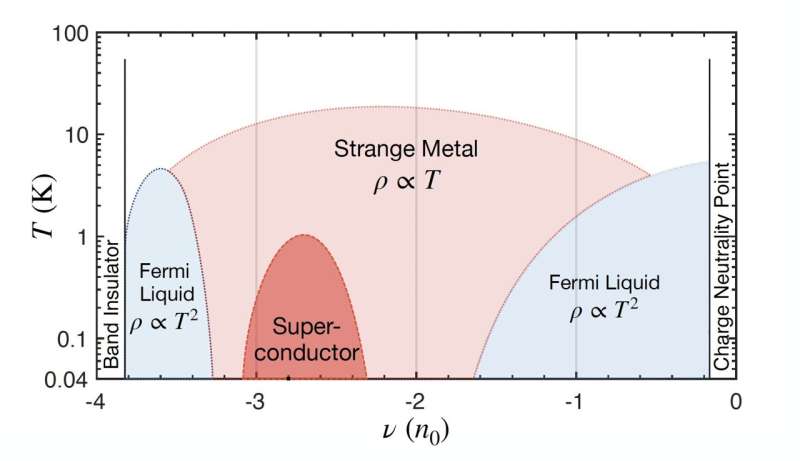 The answers to these so-far elusive questions can only be found by examining MATBG at low temperatures, where phonons (i.e., quasiparticles associated with waves such as sound or vibration) are suppressed. In the MATBG devices reported in previous literature, however, the metallic ground state was typically hidden by an array of phase transitions.

"We proposed to take advantage of our 'screened' devices, in which the correlated insulators are suppressed, to study magic-angle graphene with a much simpler low-temperature phase diagram: a single superconducting dome enclosed in a metallic phase," Jaoui explained. "This allowed us to focus on the latter state."

To fabricate their MATBG structure, Jaoui and his colleagues used a 'cut-and-stack' method often used by research teams examining 2D heterostructures. To encapsulate their device they used a thin layer of hexagonal boron nitride (hBN). 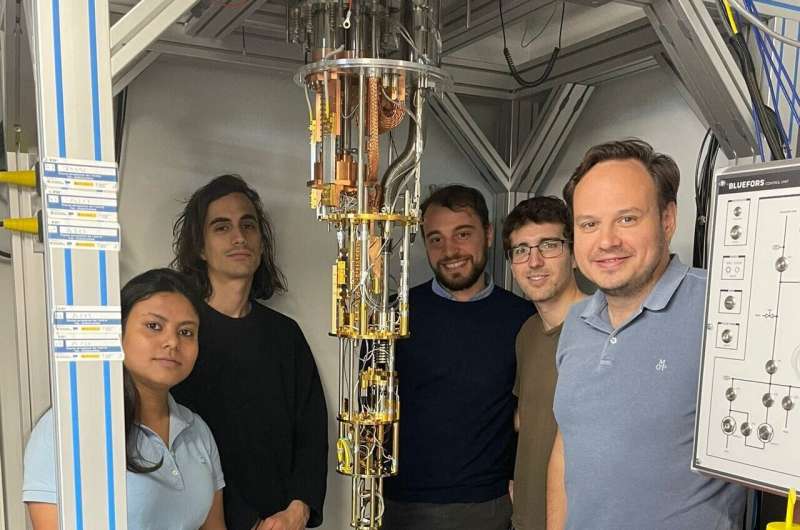 The measurements gathered by Jaoui and his colleagues confirmed the occurrence of the same 'strange' metal behavior reported in previous studies (i.e., a linear-in-T resistivity with a Planckian scattering rate). However, the team's study shows that this behavior extends to temperatures far below the Bloch-Grüneisen temperature while the system has a finite Fermi temperature. Moreover, their findings highlight an additional signature of strange metallicity, namely an enhanced linear magnetoresistance.

"Perhaps the most interesting part of this study, however, is the recovery of the archetypal behavior of a disordered dilute & correlated metal, the Fermi liquid behavior, away from the superconducting dome," Jaoui said. "This evolution suggests that fluctuations of a yet-to-be-determined nature dominate the metallic ground state in the vicinity of the superconducting dome and drive the low-temperature linear resistivity."

Overall, the findings gathered by this team of researchers suggest that quantum fluctuations and superconductivity in MATBG might be related. In the future, their work could inspire new studies examining this possibility and the quantum-critical phase observed in this study further.