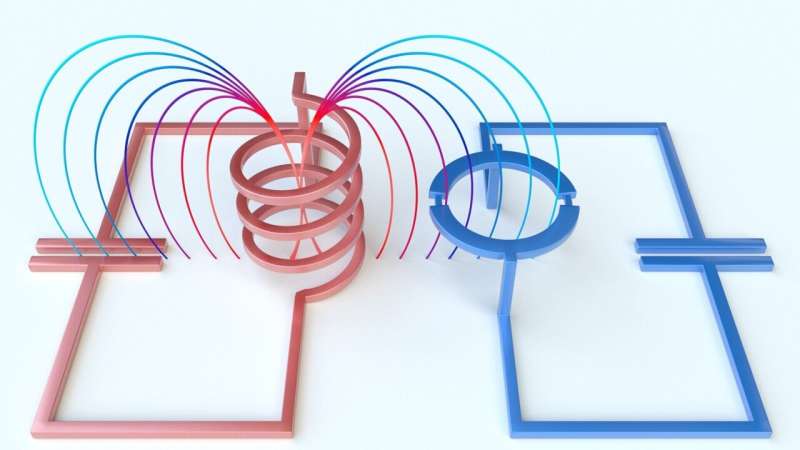 An illustration of the device, which consists of two superconducting circuits: a cold high frequency circuit (in blue) and a hot low frequency circuit (in red). Here, the current that flows in the red circuit generates an oscillating magnetic field which leads to the photon-pressure coupling. By sending in a strong signal to the blue high-frequency circuit, this one is transformed into an amplifier capable of detecting radio-frequency photons flowing in the red circuit with much higher sensitivity. Credit: Delft University of Technology

Physicists from TU Delft, ETH Zürich and the University of Tübingen have built a quantum scale heat pump made from particles of light. This device brings scientists closer to the quantum limit of measuring radio frequency signals, which may be useful in the hunt for dark matter. Their work will be published as an open-access article in Science Advances on Aug. 26.

If you bring two objects of different temperature together, such as putting a warm bottle of white wine into a cold chill pack, heat usually flows in one direction, from hot (the wine) to cold (the chill pack). And if you wait long enough, the two will both reach the same temperature, a process known in physics as reaching equilibrium: a balance between the heat flow one way and the other.

If you are willing to do some work, you can break this balance and cause heat to flow in the "wrong" way. This is the principle used in your refrigerator to keep your food cold, and in efficient heat pumps that can steal heat from the cold air outside to warm your house. In their publication, Gary Steele and his co-authors demonstrate a quantum analog of a heat pump, causing the elementary quantum particles of light, known as photons, to move "against the flow" from a hot object to a cold one.

Dark matter signals
While the researchers had already used their device as a cold bath for hot radio-frequency photons in a previous study, they have now managed to simultaneously turn it into an amplifier. With the built-in amplifier, the device is more sensitive to radio-frequency signals, just like what happens with amplified microwave signals coming out of superconducting quantum processors.
"It's very exciting, because we can get closer to the quantum limit of measuring the radio frequency signals, frequencies that are hard to measure otherwise. This new measuring tool might have lots of applications, one of them being to look for dark matter," Steele says.

A quantum heat pump
The device, known as a photon pressure circuit, is made from superconducting inductors and capacitors on a silicon chip cooled to only a few millidegrees above absolute zero temperature. While this sounds very cold, for some of photons in the circuit, this temperature is very hot, and they are excited with thermal energy. Using photon pressure, the researchers can couple these excited photons to higher frequency cold photons, which in previous experiments allowed them to cool the hot photons into their quantum ground state.

In this new work, the authors add a new twist: by sending an extra signal into the cold circuit, they are able to create a motor which amplifies the cold photons and heats them up. At the same time, the extra signal "pumps" the photons preferentially in one direction between the two circuits. By pushing photons harder in one direction than the other, the researchers are able to cool the photons in one part of the circuit to a temperature that is colder than the other part, creating a quantum version of the heat pump for photons in a superconducting circuit.