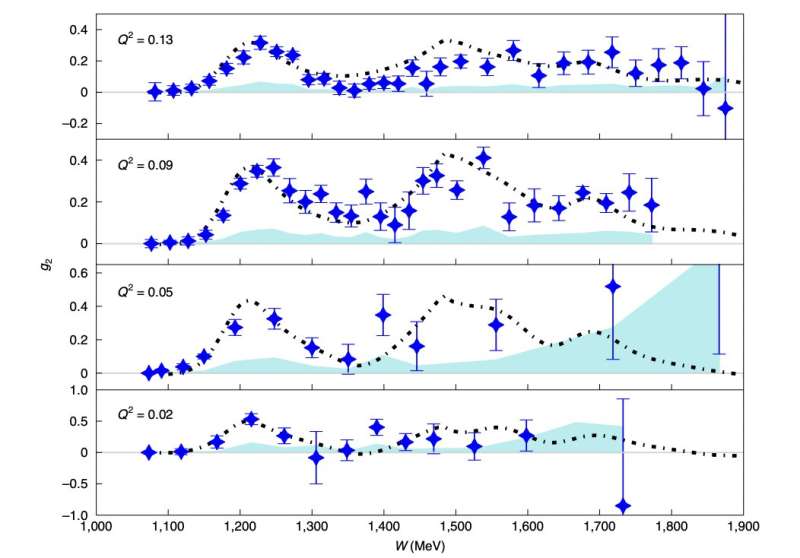 Proton spin structure function g2 as a function of invariant mass W. Each panel is adjusted to a constant momentum transfer Q2 (value in the upper-left corner); this Q2 value is presented in units of GeV2. The error bars are statistical and are the result of propagating the standard deviation of the raw measured counts through the final analysis. The shaded region represents the systematic uncertainty, which is dominated by the unpolarized model systematic and dilution factor, as discussed in the main text. The black dashed line represents the phenomenological Hall B model34,35. The grey line indicates zero to more easily distinguish sign changes in the data. Credit: Ruth et al Nature Physics (2022). DOI: 10.1038/s41567-022-01781-y

Quantum chromodynamics is an area of study that explores the strong interactions between quarks mediated by gluons. Quarks are elementary particles with an electric charge, which are building blocks of composite particles, such as hadrons and protons.
Some aspects of the strong interactions in the quantum chromodynamics regime are still poorly understood, particularly when it comes to interactions at low energies and with low momentum transfer. One theory that makes predictions about nucleonic generalized polarizabilities (i.e., fundamental quantities describing the nucleon's response to an external field in quantum chromodynamics), is chiral perturbation theory.

Researchers at University of New Hampshire, University of Virginia, The College of William and Mary, and other institutes in the U.S. and China have recently tested the predictions of chiral perturbation theory in an experimental setting. Their paper, published in Nature Physics, offers a measurement of the spin structure and generalized polarizabilities of a proton in the strong quantum chromodynamics regime.

"There are only a handful of characteristics that summarize the properties of the proton— the mass, charge, etc.," Karl Slifer, one of the researchers who carried out the study, told Phys.org. "Given the proton's role as a foundational particle in all visible matter, it's really important that we understand these few properties well. About a decade ago it became clear that the theoretical understanding of one of these quantities—known as a generalized spin polarizability—was very unsatisfactory."

The key objective of the recent work by Slifer and his colleagues was to measure generalized a proton's spin polarizability in a reliable way. To do this, they used a solid polarized ammonia (NH3) target with a strong magnetic field, oriented perpendicular to the direction of an incident electron beam.

"Our design causes a large deflection of the beam as it passes through the field on the way to the target," Slifer explained. "Therefore, it required a lot of engineering to deliver the beam onto the target and years of analysis to extract the reaction cross section from the scattered electrons that emerged from the target."

Using the measurements they collected, Slifer and his colleagues were able to characterize the internal spin structure of individual protons (i.e., subatomic particles found in the nucleus of atoms). From their data, they also extracted the proton's longitudinal-transverse spin polarizability, twist-3 matrix element, and polarizability d2, crucial parameters estimated by chiral perturbation theory.

"There are two main groups of theorists who are performing calculations for this quantity," Slifer said. "These groups employ slightly different approaches, but both predictions in principle follow directly from the same assumptions and symmetries as Quantum Chromodynamics (QCD). QCD is the theory of the strong force—one of only four known forces in nature—and direct tests of QCD are notoriously hard to come by."

Ultimately, to ascertain the validity of theoretical predictions, these predictions need to be tested in an experimental setting. The findings gathered by Slifer and his colleagues can be used to validate predictions made by chiral perturbation theory, which can in turn improve our understanding the strong quantum chromodynamics regime, including the spin structure and generalized spin polarizabilities of protons.

"Transversely polarized proton data is historically scarce because these experiments are so difficult to run and to analyze," Slifer added. "But our results show that this kind of data is really helpful to clarify how exactly the spin-dependent properties of the proton arise. We've been asked by our theory colleagues to expand these measurements to higher energy. It's another very difficult experiment that will take years to run and analyze, but it should be completed."